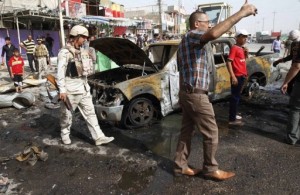 Several people have been killed in two separate explosions in the Iraqi capital, Baghdad, in the latest wave of violence in the country.

A car bomb went off in Baghdad’s Shia-dominated neighborhood of Karradah on Thursday, killing at least five people, including two policemen.

At least 12 people were also wounded in the blast that took place near a commercial area and some government offices.

Another car bomb blast also rocked the area later in the day. There have been no reports yet on the exact number of casualties.

The blasts came only two days after 40 people were killed in similar attacks and acts of violence in Baghdad’s Shia-majority areas.

This is while the country continues to count votes from its April 30 parliamentary election.

Iraqi forces also continue their offensive against al-Qaeda-linked militants in the western province of Anbar.

Militants from the al-Qaeda group, the so-called Islamic state of Iraq and the Levant (ISIL), subsequently took control of Fallujah and parts of Ramadi.

Iraqi troops, backed by local tribesmen, have been fighting al-Qaeda-affiliated militants in the region since December 2013.

According to official figures, more than 1,000 people, mostly civilians, were killed and nearly 1,400 others injured in violent attacks across Iraq last month.