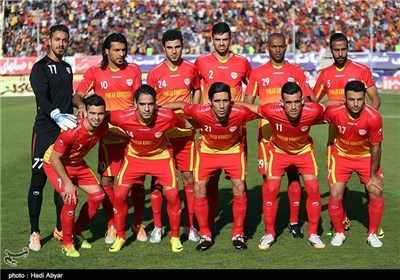 TEHRAN (Tasnim) – Iran’s sole surviving representative, Foolad, failed to reach the AFC Champions League quarterfinals after being held to a 2-2 draw by Al Sadd of Qatar.

Two teams had played out a goalless draw in the first leg which was held in Doha’s Sheik Jassim Bin Hamad Stadium.

In the match held in Ahvaz’s Ghadir Stadium, Foolad fought back from a two-goal deficit to draw 2-2 but it was not enough for the Iranian team to book a berth in the quarterfinals.

Nadir Belhadj gave the visiting team a lead in the 16th minute and Khalfan Ibrahim silenced the fans of Foolad in the 29th minute. Foolad keeper Sosha Makani made mistakes in the goals.

In the 40th minute, the referee suspended the match for the minutes after the fans threw objects onto the field.

In the 75th minute, Al Sadd defender Hassan Abdelkarim was sent off after he brought Foolad striker down in the penalty area and received his second yellow card.

Luciano Pereira Mendes converted the penalty one minutes later. The Brazilian striker found the back of the net with a header ten minutes later and made it 2-2.

Shortly after, Foolad put Al Sadd under pressure but could not open the goal for the third time and was forced to leave the competitions.