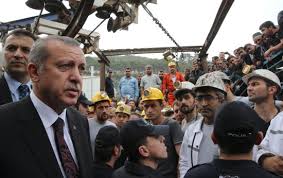 An adviser of Prime Minister Recep Tayyip Erdoğan sparked outrage after being photographed while kicking a mourner in Soma on May 14, in the wake of the previous day’s mining disaster.

Tension rose as the anger in the small mining town, where at least 282 workers lost their lives in the worst mining tragedy in Turkey’s history, turned against Erdoğan. Flanked by bodyguards, the prime minister faced boos and calls for his resignation.

Yusuf Yerkel, one of Erdoğan’s advisers, was then captured delivering an enraged kick at a grounded protester who was being held down by two soldiers. According to witness accounts, the special forces were interrogating the protester after he kicked an official car belonging to the convoy of the prime minister. Yerkel, who saw the scene as he was preparing to take a seat in the car assigned to him, reportedly ran at the protester, kicking him three or four times.

The act has caused fury on social media, with the picture being shared widely and fanning protests on the evening on May 14.

Confirming that he was the one in the picture, Yerkel said he would soon make a public statement regarding the incident.

The visit was particularly tense for Erdoğan, who was forced to take shelter in a supermarket by his bodyguards as mourners surrounded his convoy, minutes after he made a public statement arguing that mine accidents were “typical” and citing global precedents – albeit from 19th century Britain – for the disaster.