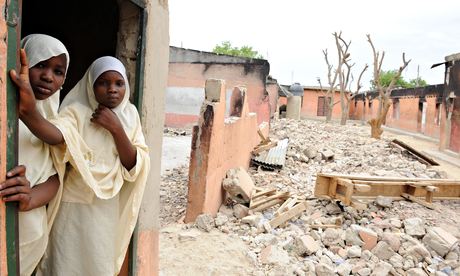 Nigerian girls in the northern city of Maiduguri stand amid the rubble of their school, which was destroyed by Boko Haram. Photograph: Pius Utomi Ekpei/AFP/Getty

The Nigerian government has confirmed that a military operation has been launched with international backing to locate and rescue more than 200 girls, who have been held captive for a month.

The government also signalled that it is ready to negotiate with Boko Haram, the Islamist militant group that snatched the girls from a school in Chibok, in the north-east of the country, although it appeared to rule out any prisoner exchange.

“International operations have commenced in collaboration with the Nigerian military … The operations are being carried out in conjunction with Nigerian troops,” Mike Omeri, coordinator of the national information centre, told a press conference.