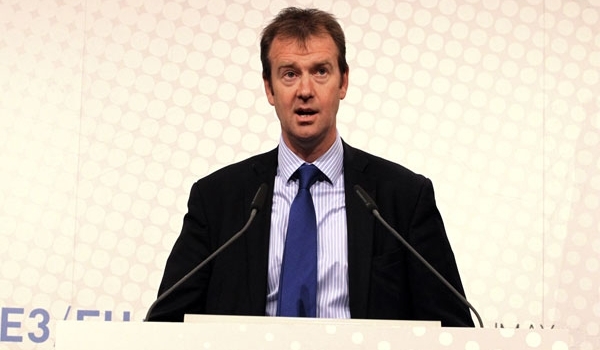 TEHRAN (FNA)- Michael Mann, the Spokesman for the EU Foreign Policy Chief Catherine Ashton, voiced satisfaction in the outcomes of this morning talks between Ashton and Iranian Foreign Minister Mohammad Javad Zarif in Vienna, saying the talks have been “useful”.

“Well, it was a useful meeting,” Mann said in a phone interview with FNA on Thursday afternoon.

Asked about the next stage of the talks between the delegations of Iran and the Group 5+1 (the US, Russia, China, Britain and France plus Germany) today, he said, “There are going to be different meetings in different formats this afternoon in the Coburg (hotel in Vienna).”

Asked about the possibility of Zarif and Ashton’s continued bilateral talks, he said, “I’m not sure. That’s not confirmed.”

His remarks came after Zarif and Ashton ended their closed-door meeting in the Austrian capital, Vienna, on Thursday. The two had a similar meeting last evening.

The meeting between the two officials, which lasted for around three and a half hours, was held over the topics and framework of a comprehensive deal between Iran and the world powers over the former’s nuclear program.

The two top diplomats met behind closed doors at Hotel Coburg and unlike the last evening meeting, this time even their negotiating teams were not present in the talks.

There are yet no reports on the results of the talks between the Iranian and EU top diplomats.

Then experts teams from Iran and the six world powers discussed the technical aspects of a final agreement.

The Iranian and EU delegations were due to resume their bilateral talks at 21:00 local time, but they postponed the second bilateral meeting after 90-minute talks between Iranian and world powers’ experts. The experts meeting had started minutes after the Zarif-Ashton meeting and focused on the technical aspects of a possible final deal.

The talks between Tehran and the Group 5+1 are part of efforts to seal a final deal on Iran’s nuclear energy program.

The negotiations started with an inaugural meeting among all the seven delegations at the UN offices in Vienna this morning. During the morning talks, the negotiating teams of Iran and the Group 5+1 raised general views about the needed framework for the final agreement and the way it should be compiled.

According to diplomatic sources, the Wednesday afternoon session between the Iranian and EU teams at Hotel Cobourg focused on the framework and topics to be touched in the accord.

Following the breakthrough interim agreement, Iran and the sextet accepted to send their senior negotiating teams to monthly meetings to discuss a final and comprehensive deal until July. If the seven nations fail to agree on a final deal by then, the Geneva interim agreement will be extended for another 6 months.

Since the November agreement, the seven delegations have met several times, including the last round in Vienna on April 8 and 9.

At the beginning of the last round of the talks on April 8, the Iranian Foreign Ministry issued a statement reiterating that its team of negotiators would not discuss any topic but the country’s nuclear standoff with the West in its talks with the six world powers.

The present round of the talks is the first Iran-powers meeting focused on drafting a final deal. The Iranian delegation arrived in Vienna on Tuesday and had dinner with Ashton’s team last night.

Upon arrival at Vienna airport on Tuesday, Zarif said Tehran would participate in the talks with firm determination.

Noting that Iran and the G5+1 are scheduled to hold three other rounds of talks by July 20, he said none of the seven delegations has prepared any draft agreement, although they have certain issues in mind.

He went on to say that “we are very hopeful and so is the other side that an agreement can be reached before July 20, if there is goodwill and real political determination”.

Araqchi added that there would be three additional rounds of negotiations besides the current one to make headway towards a permanent nuclear deal. “Two rounds of talks would be held in June while the third round could be stretched as long as 20 days in July, if there is a need for it.”

He stressed negotiations were at the most sensitive stage, saying the start of drafting a final accord was the most difficult and complicated phase. Araqchi acknowledged some of the issues were really difficult and there remained some big gaps. “Bridging the gaps is very difficult but not hopeless,” he said.

Following the Wednesday morning session, Mann wrote on his Twitter page that the seven delegations had “useful discussion”.

“Now internal consultations (among the G5+1 members) will take place. (The Iran-six powers) talks will resume this afternoon,” he added.

After Mann’s comments, the delegations of the six world powers had an internal meeting with Ashton, who presides the G5+1 negotiators in the talks with Iran.