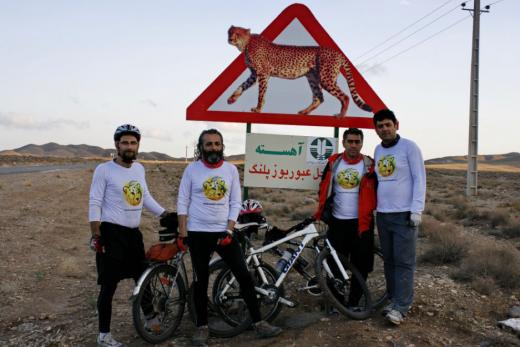 Kushki, an Asiatic male cheetah, is waiting for a response to his marriage proposal, which was delivered by his best men, four cyclists. The cyclists travelled 400 kilometres to bring the message to Delbar, a female cheetah who lives on the other side of Iran.

It may sound like a joke – and truth be told, the cheetahs won’t get any say in this arranged “marriage” – but there’s a lot riding on these two rare animals, whom environmentalists hope will breed.
This subspecies of cheetahs, recognisable by its crest of hair, used to inhabit many Asian countries. Today, it is extinct in the wild everywhere but in Iran, where it is critically endangered. Asiatic cheetahs are concentrated in the country’s central plateau, where approximately 50 of them have been spotted over the past few years. The young Kushki and Delbar, who have both lived in captivity since childhood, represent a unique opportunity to breed more cheetahs.
The Conservation of Asiatic Cheetah Project (CACP), an initiative between Iran’s department of the environment and a UN development programme, is planning to bring the two together in the autumn. They’ll meet in a special centre just for them in Tehran. But that’s only the beginning. Asiatic cheetahs are not easy to breed. According to CACP’s director Homan Jokar, there is only about a 30 percent chance that they will successfully mate.
In the meantime, CACP is seizing the opportunity to educate the public with the cheetah “love story”. They sponsored four volunteer cyclists who travelled the 400 kilometres between the two animals’ current residences – Kushki in the Miandasht Wildlife Refuge and Delbar in theTuran National Park. Their goal was officially to deliver a marriage proposal. In reality, their main aim was to stop and talk to people along the way about the importance of safeguarding cheetahs in the wild. They completed their trip on April 30.

The cyclists at a cheetah crossing.

Mohamad Gaeini, a software engineer by trade, was one of the volunteer cyclists.

Five years ago a hunter name Kushki captured a baby cheetah, which he gave to the Miandasht Wildlife Refuge. They named it after him. Then two years ago, a baby female cheetah was found, alone, and taken to Turan National Park. Ever since then, everyone’s been thinking about the possibility of their mating, and now that they’re old enough to meet, we became the messengers for this happy occasion.

I talked to many people on our way and tried to spread awareness about the fight to keep cheetahs alive. I got some unexpected responses, such as a young shepherd who told me that cheetahs are not like wolves –

they may hunt one lamb but will not kill too many of them, and therefore he is determined to leave cheetahs alone.

It was great to see that many people in the bride’s area already knew about her wedding plans. I saw a little girl go near Delbar’s fence and call to her, ‘Miss Delbar! Miss Bride!’

I hope to see their baby cheetahs soon. Myself and many Iranians have taken to social media to talk about their future, and wish them health and happiness as the symbol of Iran’s wild nature.

Along the way, the cyclists distributed cheetah-themed gifts and informational brochures. They also attended a symbolic futsal match in Bafq, Yazd province, where they were joined by celebrities supporting their cause. Next month, the Iranian national football team will wear shirts with Asiatic cheetahs on them when they play the World Cup to bring awareness to their plight.

The cyclists informed people about the endangered cheetas along their way.

A cheetah in the wild.