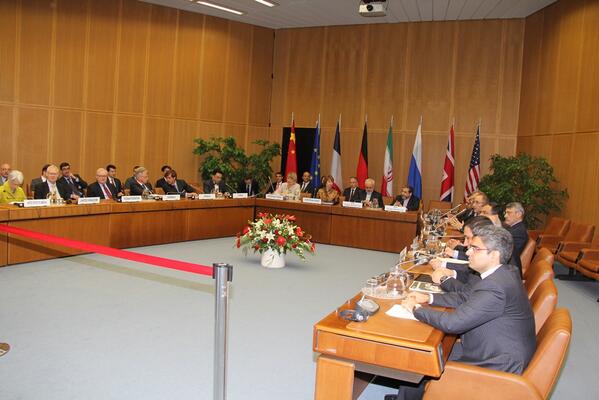 TEHRAN (FNA)- Senior negotiators from Iran and the six world powers ended their morning session in Vienna minutes ago.

The talks started in the Austrian capital at 10:00am (local time), and ended after almost half an hour. The negotiations will continue this afternoon.

The delegations of the six world powers are due to meet with EU foreign policy chief Catherine Ashton, who presides the Group 5+1 negotiators in the talks with Iran, before the afternoon session with the Iranian team.

Upon arrival at Vienna airport on Tuesday, Iranian Foreign Minister and head of the country’s delegation in talks with the world powers Mohammad Javad Zarif said Tehran would participate in the talks with firm determination.

Zarif and Ashton held a working dinner in Vienna on Tuesday night to confer on the latest developments in the talks between Tehran and the Group 5+1.

After the talks, Zarif reiterated that the country’s negotiators would not discuss issues related to Iran’s defensive capabilities in the talks with the world powers.

“Iran’s defensive issues and our defensive capabilities will not be an issue for negotiations,” Zarif told reporters.

He described his talks with Ashton as good, and said, “This round of negotiations is more sensitive since we will start writing (a comprehensive deal between the two sides).”

Asked if the negotiations will yield results by the end of the stated 6-month period (which ends on July 20), Zarif said, “I believe it is possible but it depends on how much good will and pragmatism the other side shows in the negotiations.”

Stressing that Iran seeks to materialize its rights of access and use of the peaceful nuclear technology and is not after the proliferation of atomic weapons, he said, “We believe atomic weapons are not beneficial to our country and we don’t have any problem if this is clearly shown to the world.”

The Iranian top diplomat underlined that the Iranian delegation has come to Vienna with a firm will to settle the differences with the world powers, but meantime, said if the two sides cannot reach an agreement by July 20, the time for implementing the interim agreement will not be extended automatically and it will need further negotiations.

Also, a senior member of Iran’s negotiating team in talks with the six major world powers underlined that Tehran is resolved to do its best to remove possible barriers in the way of concluding a permanent deal with the Sextet, and urged the opposite side to do the same.

He went on to say that we are very hopeful and so is the other side that an agreement can be reached before July 20, if there is goodwill and real political determination.

Araqchi added that there would be three additional rounds of negotiations besides the current one to make headway towards a permanent nuclear deal.

Two rounds of talks would be held in June while the third round could be stretched as long as 20 days in July, if there is a need for it, the Iranian official said.

He stressed negotiations were at the most sensitive stage, saying the start of drafting a final accord was the most difficult and complicated phase.

Araqchi acknowledged some of the issues were really difficult and there remained some big gaps.

Bridging the gaps is very difficult but not hopeless, he said.

He also underlined that Tehran will not discuss any change in the nature of its heavy water reactor in the Central city of Arak but will try to obviate the westerners’ concerns in this regard.

“Different solutions and options have been raised about Arak, the most important of which is what Head of the Atomic Energy Organization of Iran (AEOI) Ali Akbar Salehi has said and obviates the concerns about Arak by making some technical changes in certain parts of the reactor to reduce the amount of plutonium which may cause concern,” Araqchi said.

Stressing that the nature of Arak heavy water reactor won’t change at all, he said, “The power of Arak reactor won’t reduce and it will continue its predesigned path and we will possibly decrease or obviate the concerns existing about it by some changes.”

Asked about Iran’s nuclear Research and Development activities, Araqchi underlined that no limitations can be envisaged for R&D activities, adding that stopping Iran’s R&D program has never been actually demanded by the world powers in the negotiations and will never be accepted by Tehran.

The last round of negotiations between Iran and the G5+1 took place in Vienna on April 8 and 9.

The Iranian Foreign Ministry in a statement on April 8 reiterated that its team of negotiators would not discuss any topic but the country’s nuclear standoff with the West in its talks with the six world powers.

The talks between Tehran and the G5+1 are part of efforts to seal a final deal on Iran’s nuclear energy program.

Iran and the Group 5+1 representatives had several sessions of talks in Vienna on March 18-19 too. Following the breakthrough interim agreement between Iran and the six powers, the two sides accepted to send their senior negotiating teams to monthly meetings to discuss a final and comprehensive deal until July. If the seven nations fail to agree on a final deal by then, the Geneva interim agreement will be extended for another 6 months.