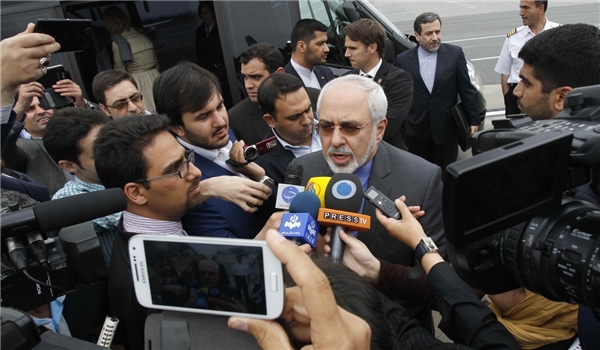 FM: Iran’s defensive capabilities no subject for talks with powers

TEHRAN (FNA)- Iranian Foreign Minister Mohammad Javad Zarif reiterated that the country’s negotiators will not discuss issues related to Iran’s defensive capabilities in the talks with the world powers.

“Iran’s defensive issues and our defensive capabilities will not be an issue for negotiations,” Zarif told reporters after meeting EU foreign policy chief Catherine Ashton for a working dinner in Vienna on Tuesday night and before the start of a new round of talks between representatives of Iran and the Group 5+1 (the US, Russia, China, Britain and France plus Germany) in the Austrian capital.

He described his talks with Ashton as good, and said, “This round of negotiations is more sensitive since we will start writing (a comprehensive deal between the two sides).”

Asked if the negotiations will yield results by the end of the stated 6-month period (which ends on July 20), Zarif said, “I believe it is possible but it depends on how much good will and pragmatism the other side shows in the negotiations.”

Stressing that Iran seeks to materialize its rights of access and use of the peaceful nuclear technology and is not after the proliferation of atomic weapons, he said, “We believe atomic weapons are not beneficial to our country and we don’t have any problem if this is clearly shown to the world.”

The Iranian top diplomat underlined that the Iranian delegation has come to Vienna with a firm will to settle the differences with the world powers, but meantime, said if the two sides cannot reach an agreement by July 20, the time for implementing the interim agreement will not be extended automatically and it will need further negotiations.

Representatives of Iran and the G5+1 are due to start compiling and drafting a comprehensive deal in their today meeting in Vienna.

The last round of negotiations took place in Vienna on April 8 and 9.

The Iranian Foreign Ministry in a statement on April 8 reiterated that its team of negotiators would not discuss any topic but the country’s nuclear standoff with the West in its talks with the six world powers.The talks between Tehran and the G5+1 are part of efforts to seal a final deal on Iran’s nuclear energy program.

Iran and the Group 5+1 representatives had several sessions of talks in Vienna on March 18-19 too. Following the breakthrough interim agreement between Iran and the six powers, the two sides accepted to send their senior negotiating teams to monthly meetings to discuss a final and comprehensive deal until July. If the seven nations fail to agree on a final deal by then, the Geneva interim agreement will be extended for another 6 months.