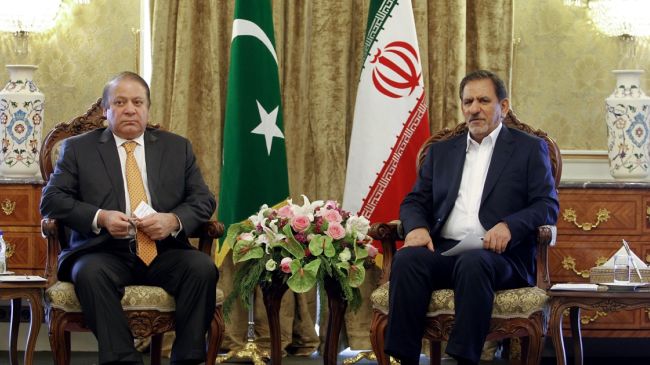 A senior Iranian official says Islamabad must fulfill its commitments regarding the multi-billion-dollar gas pipeline projected to carry natural gas from Iran to Pakistan.

“The gas pipeline has reached near the Pakistani border and given the investment made, we expect that Pakistan will fulfill the commitments and agreements signed in this regard,” Iran’s First Vice President Es’haq Jahangiri said in a Sunday meeting with Pakistani Prime Minister Nawaz Sharif in Tehran.

He added that the Iran-Pakistan gas project represents the symbol of cooperation between the two countries.

“Iran and Pakistan are two influential countries in the region and the Muslim world and the [Pakistani premier’s] visit [to Tehran] can serve the two nations’ interests and be effective with regards to achieving regional goals,” Jahangiri said.

Sharif, for his part, highlighted the significance of the project and said his country welcomes multilateral cooperation in oil and gas sectors.

The premier added that Iran and Pakistan share a long border which should be safe and secure.

The Iran-Pakistan pipeline is designed to help Pakistan meet its growing energy needs.

According to the original agreement sealed between Iran and Pakistan, the first Iranian gas delivery to Pakistan should start by December 31, 2014.

Heading a high-ranking delegation, Sharif arrived in Tehran on Sunday for an official two-day visit to hold talks with senior Iranian officials.

The two sides are expected to sign agreements and memoranda of understanding to strengthen cooperation.