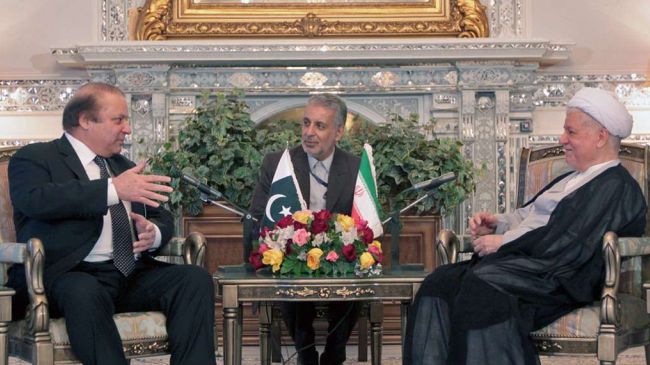 A senior Iranian official has called for Tehran and Islamabad to work together to save Afghan people from civil war.

“Although the political prospects of Afghanistan is uncertain, Iran and Pakistan are duty-bound not to allow civil war to once again victimize the innocent people of Afghanistan,” said Chairman of Iran’s Expediency Council Ayatollah Akbar Hashemi Rafsanjani, alluding to the ongoing fight between Taliban militants and government forces in Afghanistan.

Rafsanjani made the remarks in a meeting with Pakistani Prime Minister Nawaz Sharif in Tehran on Sunday.

Rafsanjani expressed concern over the spread of terrorism in Muslim countries and called on Muslim thinkers to restore peace and security to the Muslim world.

Ayatollah Rafsanjani voiced the Islamic Republic’s readiness to help remove the concerns of Muslims, saying with proper planning, the authorities of other Muslim countries should also foil plots aimed at sowing discord among Muslims.

Rafsanjani further described the expansion of ties with the neighboring countries as a central plank of Iran’s foreign policy.

Pointing to the existing potential and commonalities between the two countries to expand bilateral and regional cooperation, he said the people of Iran and Pakistan should tap into one another’s potential for the sake of public welfare.

Sharif, for his part, said Iran and Pakistan enjoy great potentialities to enhance cooperation in the fields of trade, economy and industry.

With unity, he noted, Islamic countries can not only solve regional conflicts, but exploit their own potential to promote peace.

Heading a high-ranking delegation, Sharif arrived in Tehran on Sunday for an official two-day visit.