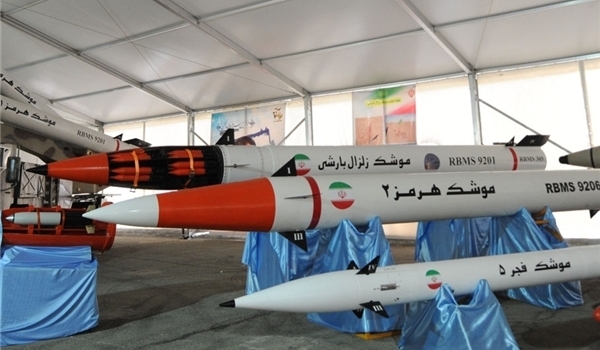 The surface-to-surface Zelzal missile is equipped with thirty 17-kg bombs which can destroy a wide range of targets and is a proper option for targeting airport runways and equipments, installations and facilities on the ground.

The solid-fuel missile with a 300-km range is among the most important missiles which can attack enemy targets and bases in short distances.

Zelzal was unveiled on Sunday in the presence of Supreme Leader of the Islamic Revolution Ayatollah Seyed Ali Khamenei in a two-hour tour of the IRGC’s Aerospace Exhibition, where state-of-the-art equipment and hardware were showcased.

The missile was earlier test-fired in 2011 during the drills, codenamed Payambar-e Azam (The Great Messenger) 6, but it was then armed with regular payloads.

Then this March, the Iranian Defense Ministry announced that it had equipped its Qadr H and Qiam ballistic missiles with its newly developed MRV payloads.

The two missiles are capable of carrying different types of ‘Blast’ and ‘MRV’ payloads, and can destroy a wide range of targets. The new version of Qadr H and Qiam can be launched from mobile platforms or silos in different positions and can escape missile defense shields due to their radar-evading capability.

Qadr is a 2000km-range, liquid-fuel and ballistic missile which can reach territories as far as Israel. Qiam is also a new type of surface to surface and cruise missile of Iran.

A Multiple Reentry Vehicle payload for a ballistic missile deploys multiple warheads in a pattern against a single target. (As opposed to Multiple independently targetable reentry vehicle, which deploys multiple warheads against multiple targets.) The advantage of an MRV over a single warhead is that the damage produced in the center of the pattern is far greater than the damage possible from any single warhead in the MRV cluster, this makes for an efficient area attack weapon. Also, the sheer number of Warheads make interception by Anti-ballistic missiles unlikely.

Improved warhead designs allow smaller warheads for a given yield, while better electronics and guidance systems allowed greater accuracy. As a result MIRV technology has proven more attractive than MRV for advanced nations. Because of the larger amount of nuclear material consumed by MRVs and MIRVs, single warhead missiles are more attractive for nations with less advanced technology. The United States deployed an MRV payload on the Polaris A-3. The Soviet Union deployed MRVs on the SS-9 Mod 4 ICBM. Refer to atmospheric reentry for more details.

In recent years, Iran has made great achievements in its defense sector and attained self-sufficiency in developing and manufacturing its essential needs to military tools, weapons, equipment and systems.