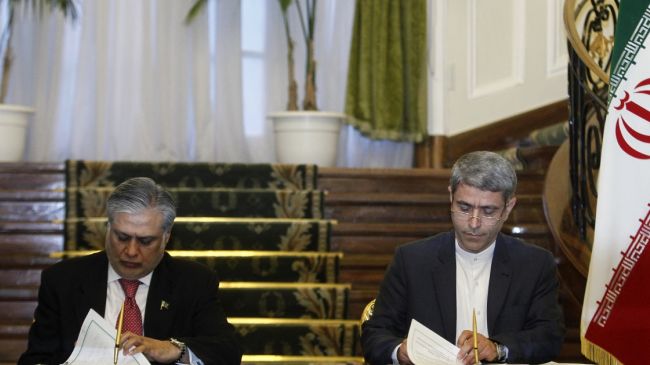 Iran and Pakistan sign nine memoranda of understanding (MoUs) to promote bilateral cooperation on May 11, 2014.

Iranian Minister of Economic Affairs and Finance Ali Tayyeb-Nia says the volume of trade exchanges between Iran and Pakistan is set to reach some USD five billion in the future.

On Monday, Tayyeb-Nia stressed the need for the promotion of economic relations between Tehran and Islamabad. He made the comments after seeing off Pakistani Prime Minister Nawaz Sharif to the Iranian holy city of Mashhad.

He pointed to the talks between Iranian authorities and the visiting Pakistani delegation in Tehran, saying the two sides seek to first increase their trade volume to some USD three billion and later to some USD five billion in the future, up from nearly USD one billion in recent years.

Iranian and Pakistani officials also exchanged views on ways to overcome the existing obstacles in the way of Tehran-Islamabad economic ties, he said.

Earlier on Monday, Tayyeb-Nia met with his Pakistani counterpart Mohammad Ishaq Dar to discuss the enhancement of economic cooperation between the two neighboring countries.

Heading a high-ranking delegation, Sharif arrived in Tehran on Sunday for two days of talks with senior Iranian officials over the issues of bilateral and regional significance.