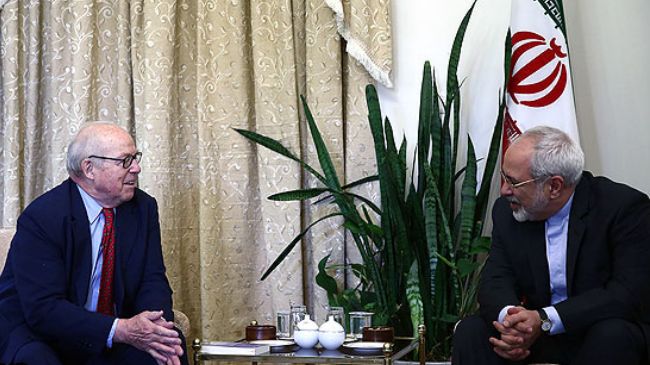 In a Sunday meeting with former Director General of the International Atomic Energy Agency (IAEA) Hans Blix in Tehran, Zarif said any final nuclear accord with the P5+1 group which comprises Russia, China, France, Britain, the US and Germany –must create the opportunity for Iran to exercise its “inalienable” right to use peaceful nuclear energy.

Tehran and the six countries inked a landmark interim agreement on Iran’s nuclear energy program in the Swiss city of Geneva in November 2013. The deal took effect on January 20.

The two sides are currently in talks in an effort to hammer out a final accord aimed at fully resolving the decade-old dispute between the West and Tehran over the latter’s nuclear energy program.

The Iranian foreign minister further described “mutual mistrust” as the main obstacle that used to stand in the way of nuclear talks between Tehran and the P5+1 group.

“Given that the western states failed to abide by their commitments towards Iran, the Islamic Republic of Iran made efforts to meet its need for peaceful nuclear energy through relying on its own capabilities,” added the top Iranian diplomat.

Blix, who currently heads Sweden’s Weapons of Mass Destruction Commission, for his part, welcomed the interim Geneva agreement between the Islamic Republic and the P5+1.

He also expressed hope that the ongoing discussions between Iran and the P5+1 would lead to a final accord on Tehran’s nuclear energy program and that both sides would honor their obligations under the possible deal.