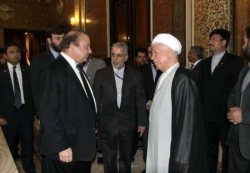 Tehran, May 12, IRNA – Chairman of the Expediency Council Ayatollah Ali Akbar Hashemi Rafsanjani in a meeting on Sunday with visiting Prime Minister of Pakistan Nawaz Sharif said expansion of cooperation with neighboring states is the main priority in Iranˈs foreign policy.

Stressing that no specific political problem existed between Tehran and Islamabad, Rafsanjani said unjust sanctions imposed on Iran by the West have chilled bilateral relations between the two capitals.

Referring to problems caused by Taliban in Afghanistan, Rafsanjani said although the countryˈs political outlook is not clear, Iran and Pakistan were responsible to prevent the oppressed people of Afghanistan be victimized by another civil war.

Touching upon Iranˈs relations with Arab countries in the region, Rafsanjani referred to Iran-Saudi Arabi ties noting that the two countries enjoyed a significant status among Islamic states.

He said bilateral cooperation between Tehran and Riyadh has flourished following the extraordinary meeting of the Organization of the Islamic Conference (OIC) in Pakistan.

Expressing concern about expansion of terrorism in the Islamic countries, Ayatollah Rafsanjani referred to terrorists and extremists as the main problem facing Islamic states.

He urged Muslim intellectuals to remove the ˈcancerous tumorˈ from the body of Islam and prevent more insecurity in the Islamic world.

Referring to the ongoing crises in Iraq and Syria, the prominent cleric said those crises would only add to the problems facing the Islamic world and cause killing of more innocent people.

The Pakistani premier arrived here on Sunday for a two-day visit which is taking place upon an invitation of President Hassan Rouhani.

He said that regional disputes would be resolved easier through cooperation and unity of the Islamic states.