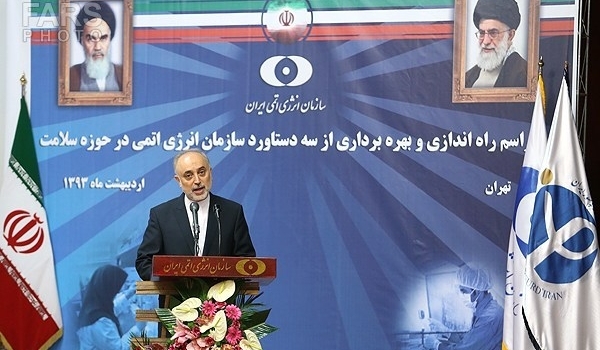 “In the framework of a wide perspective, our key approach in coming years will include moving on the path of commercializing the nuclear industry products, competing with similar foreign products in various aspects, including prices, and expanding and deepening the AEOI’s presence in activities related to the health issues,” Salehi said, addressing a ceremony, participated by President Hassan Rouhani, to unveil three new medical achievements of the AEOI in Tehran on Sunday.

Salehi underlined the new Iranian government’s policy and intention to expand the applications of the civilian nuclear technology, specially in medical fields, and said, “Iranian nuclear scientists are seeking to reduce the pains and sufferings of Iranian patients.”

Iranian scientists have taken long strides in producing radiomedicine needed for patients after the western states banned their selling to Iran due to the sanctions imposed against the country.

Iran in April 2013 unveiled five new home-made radiomedicines. The radiomedicines were developed and produced by Iranian experts at the AEOI and with the cooperation of the presidential office for science and technology.

In February 2013, former AEOI Chief Fereidoun Abbasi announced that Iran is due to unveil 8 new radiomedicines with applications for diagnosis, prevention and treatment of a number of diseases.

“We have produced a number of radiomedicines before, and at present we have 5 new radiomedicines under production,” Abbasi said in a ceremony in Tehran at the time.