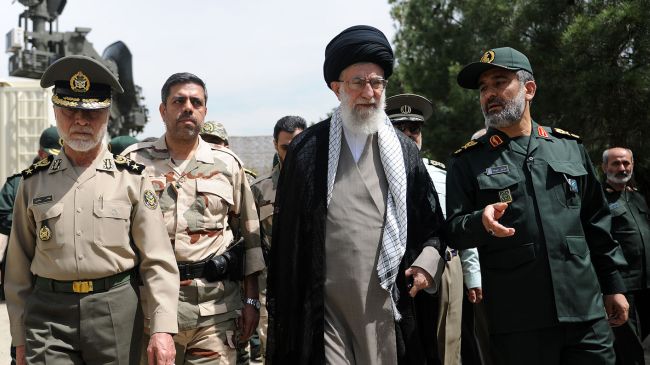 Leader of the Islamic Revolution Ayatollah Seyyed Ali Khamenei says the Western expectation that the Islamic Republic limit its missile power is a “stupid” idea.

Ayatollah Khamenei, who made the remarks on Sunday during a visit to the Islamic Revolution Guards Corps (IRGC) Aerospace Forces’ Central Command, was reacting to a request made by world powers currently engaged in nuclear talks with Iran.

“They (the West) expect limits to Iran’s missile program while persistently threatening Iran with military [action]. Therefore, such an expectation is stupid and foolish,” the Leader said.

“The arrogant front is making efforts to bring the Iranian nation to its knees and force it into retreat, but it will definitely not achieve this goal,” Ayatollah Khamenei said.

The Leader reaffirmed his support for “negotiations and initiatives in foreign policy” but said that “such issues as sanctions should not be tied to negotiations.”

“The officials must resolve the issue of sanctions in another way,” Ayatollah Khamenei said.

The exhibition Ayatollah Khamenei was visiting had put on display the achievements of the IRGC Aerospace Forces in the design and development of drones, radars and defense systems as well as anti-ship, ballistic and anti-shield missile systems.

“The most important lesson of this exhibition is the proof of the talent and capability of the Iranian nation for entry into difficult fields and the fields from which the enemy intends to bar them (the Iranians),” the Leader said.