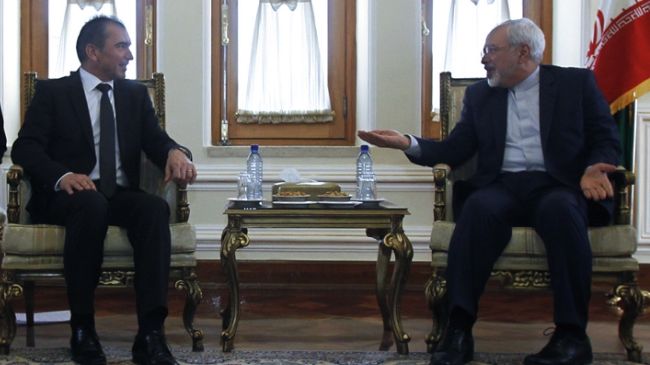 Iranian Foreign Minister Mohammad Javad Zarif says there is a “great opportunity” for cooperation between the Islamic Republic and the European Union in different economic sectors.

Zarif made the remarks at a meeting with Slovenian Parliament Speaker Janko Veber in Tehran on Saturday, IRNA reported.

The two officials also emphasized on Iran’s role in tackling regional issues, noting that ties with Iran would pave the way for better relations in the region.

“There are vast areas for cooperation and consultation between Iran and the EU in the regional level,” Zarif noted, adding, “The EU cannot remain safe from radicalism in Syria as many of the radicals come to the country from Europe.”

The Iranian foreign minister called for expansion of ties between Tehran and Ljubljana in different fields, including “exchange of students, professors, and researchers.”

Slovenian parliament speaker, for his part, said there is a “good ground for the development of bilateral relations,” following nuclear negotiations between Iran and the Sextet of world powers.

Iran and the five permanent members of the United Nations Security Council — China, Russia, Britain, France, and the United States — plus Germany clinched a landmark interim deal in the Swiss city of Geneva on November 24, 2013.