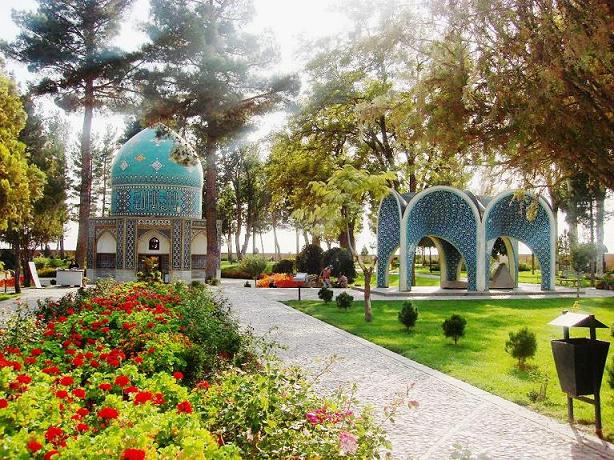 Neyshabur: The land of Attar, Khayyam and blue Turquoise

Some people in Khorasan region have this strange belief that if a family moves to Neyshabur and lives there for sometime, they will have blue-eyed babies. They also say most people in Neyshabur have turquoise eye-color.Whether myth or reality, blue-eyed or not, the most important Neyshabur’s souvenirs are turquoise gemstones.

Neyshabur Turquoise is the finest in the world.  For at least 2,000 years, Iran and Neyshabur has remained an important source of turquoise which was named by Iranians initially “pirouzeh” (Arabic Firouzeh) meaning “victory”. This deposit, which is blue naturally, and turns green when heated due to dehydration, is restricted to a mine-riddled region in Neyshabur, the 2,012-metre (6,601 ft) mountain peak of Ali-mersai, which is tens of kilometers from Mashhad, the capital of Khorasan province.

In Iranian architecture, the blue turquoise was used to cover the domes of the Iranian palaces because the intense blue color was also a symbol of heaven on the earth.

On the Silk Road to Neyshabur

Tomb of Omar Khayyam
Outside Iran and Persian speaking countries, Khayyám has had an impact on literature and societies through the translation of his works. Khayyam, the famous Iranian poet, philosopher, mathematician and astronomer was born in Neyshabur and  was buried there after death in the Khayyam Garden at the mausoleum of Imamzadeh Mahruq.

He is the author of one of the most important treatises on algebra written before modern times. He also completed Iranian Jalali Calendar, the official calendar which is used in Iran today. His mausoleum which was completed in 1963, remains a masterpiece of Iranian architecture visited by many people every year.

Of his poems:
And, as the Cock crew, those who stood before
The Tavern shouted— “Open then the Door!
You know how little time we have to stay,
And once departed, may return no more.

In the name and spirit of the great astronomer Omar Khayyam, a new Planned-planetarium was built in Neyshabour some short steps from his tomb.

Mohammad Ghaffari, known as Kamal Al Molk was a famous Iranian painter and the royal painter of King Nasereddin Shah Qajar at the age of 18. Kamal-ol-Molk died in Neyshabur, Iran, in 1940. Mournful people, especially family and closely related friends, marched his body next to the tomb of Sufi poet, Attar. His mausoleum is another Iranian architectural masterpiece, done by the same architect who built that of Omar Khayyam.

There is not much known about the life of Attar, however sources confirm that he was born in Neyshabur. He was one of the most famous mystic poets of Iran and his works were the inspiration for Rumi and many other poets. Among the modern writers, the Argentinian writer Jorge Luis Borgeswas very much influenced by Attar’s book the Conference of the Birds.  Attar died a violent death in the massacre which the Mongols inflicted on Neyshabur in April 1221. This attack was an end to the life of many great scholars as to Neyshabur was city of knowledge and innovation at the time. The Mongol invasion changed the city to blood river and Neyshabur could never gain back its place in the world. Today, Attar’s mausoleum is one of the major destination for tourists as well as the lovers of his teachings.

The beautiful garden is located on Binalud mountain and together with the structure inside it, was built during Safavi dynasty. Though the place performed as Caravanserai or roadside inn long before than that, where travelers could rest and recover from the religious journey to Mashhad. Inside the building there is a spring which the water is still flowing for centuries. It is said that Imam Reda a.s the 8th Shia Imam stopped there for prayer on his way to Tus, the Abassid throne and the water has been flowing to the surface since then.

Located in South East Neyshabur at Mohammad Abad village, this mosque is said to be the first and only wooden mosque in the world.

The wooden Mosque in Mohammadabad

Neyshabur; All in One

In the northern part of Neyshabur on Binalud mountain range the weather is cold and snowy in winter and the scenery is green and beautiful in spring and summer. While the south is plain desert and the weather is hot. Severe wind often blows during spring and fall in south Neyshabur and covers part of the agricultural fields with sand.

There is a Middle Eastern proverb that suggests two things make men free from sorrow: Morning of Neyshabur and Sleeping in Baghdad. People in Khorasan believe in the Neyshabur’s morning breeze and travel to Neyshabur from the cities nearby only to experience breathing the Neyshabur fresh morning air. It may have only been a myth or maybe the chill breeze that is blowing from Binalud mountain range has some connections to the gentle wind in Tibet. After all, Neyshabur has them all. As Jorge Luis Borges was quoted : “If you wanted to travel to only one city in the world, I have no doubt that’s the city of Nishapur. I think the secret is all in the same universe.”

By Dream Of Iran