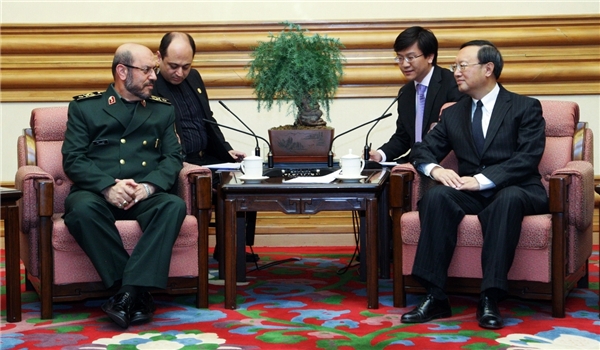 During the meeting on the last day of the Iranian minister’s trip to Beijing on Wednesday, Dehqan and Jiechi conferred on the latest global and regional developments, and laid emphasis on the further expansion of bilateral relations in all the various spheres, specially in security and defensive fields.

The independence of the two countries and remaining uninfluenced under third-party pressures was among the other issues underscored by the two officials.

They also blasted certain countries’ double-standard behavior, and laid much stress on the necessity of serious fight against terrorism and extremism.

In relevant remarks today, Dehqan said cooperation between Tehran and China will decrease insecurity in the world.

“Cooperation among independent countries like Iran and China can play an effective role in reducing insecurities,” Dehqan said in a meeting with Vice Chairman of the Central Military Commission (CMC) of the People’s Republic of China Fan Changlong in Beijing.

He said that fighting terrorism and extremism through unilateral policies and double-standard behavior can produce no achievement but the current critical and fragile situation. “Fighting terrorism needs precise identification of its roots, causes and motivations.”

The Chinese official, for his part, referred to the age-old relations between Tehran and Beijing, and said, “China seeks to develop its relations with Iran in all fields.”

Iran and China have somehow forged an alliance in recent years against the western hegemonic powers.