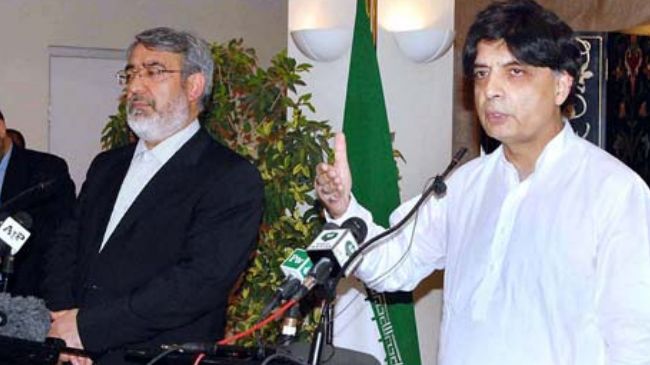 Iran and Pakistan have agreed to conduct joint cross-border operations in the fight against terrorism and narcotics smuggling.

He said that Iran, Afghanistan and Pakistan will convene a trilateral meeting in Tehran in the future to discuss further cooperation among the border guards of the three neighboring countries.

The Iranian official also said that the Islamic Republic is determined to implement an already signed security agreement with Pakistan on combating organized crime and fighting terrorism.

The two sides have agreed to set up a hotline between Pakistan’s Frontier Corps and Iran’s border security force, he added.

He also said that Pakistan was committed to boosting security cooperation with Iran.

The Iranian interior minister arrived in Islamabad on Monday on an official visit to discuss ties between the two neighboring countries, particularly security cooperation.

Iran and Pakistan have decided to boost security and anti-terrorism cooperation following the kidnapping of five Iranian border guards in Jakigour region in the southeastern Iranian Sistan and Baluchestan Province in February. The abducted guards were taken to Pakistani territory. Four of them were released in April but the fate of the fifth one remains unknown.