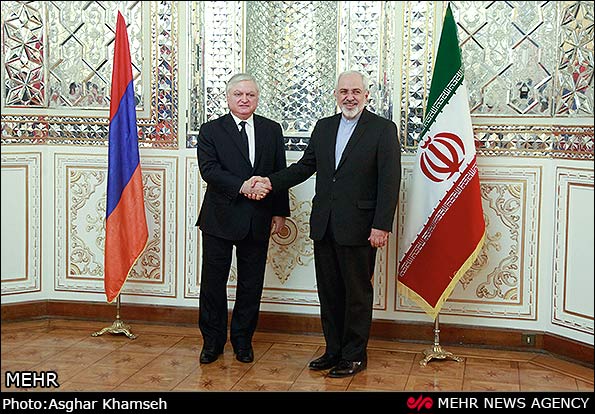 Speaking to reporters in a joint press conference with his Iranian counterpart Mohammad javad Zarif, he said Armenia was among the first countries to welcome the results of Geneva talks between Iran and G5+1 on the countryˈs peaceful nuclear program.

He also thanked Iranian officials for their warm hospitality during his stay in Tehran.

Yerevan attaches importance to its relations with Tehran and is ready to broaden mutual cooperation in the future, he said.

Friendly talks were with Iranian officials under very sincere atmosphere, he said.

Referring to his negotiations with Zarif, he described the talks as very fruitful.

The two sides discussed a wide range of issues such as transportation, energy and implementation of joint projects, said the Armenian foreign minister.

The two ministers also exchanged views on other international developments such as crises in Syria and Ukraine and talks between Iran and G5+1, he said.

Armenia was among countries who welcomed results of talks between Iran and G5+1, said the Armenian foreign minister.

He expressed the hope that through collective contribution of both sides they would witness further development of bilateral relations.

The two sides also discussed latest developments in Karabakh, he said and praised Iranˈs stands on the issue.

The Armenian foreign minister is to confer with President Hassan Rouhani and Majlis Speaker Ali Larijani on issues of mutual interests as well as regional developments.

The Armenian foreign minister heading a delegation arrived in Tehran on Monday.

He is to submit a written message from the Armenian president to President Rouhani on issues of mutual interests, regional and international developments.