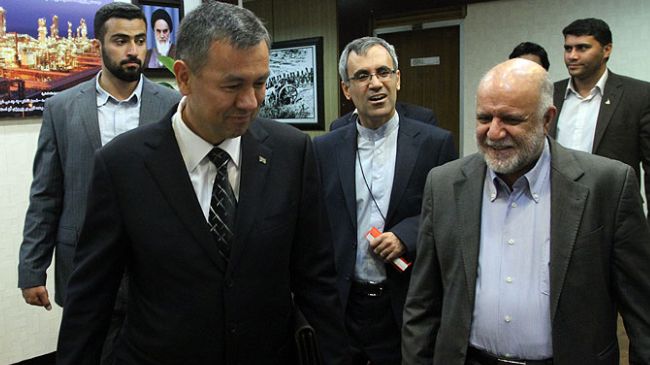 Iran’s oil minister says the Islamic Republic is set to prepare the ground for a gas-for-goods deal with neighboring Turkmenistan.

“Iran intends to prepare the grounds for exporting goods [to Turkmenistan] in return for gas purchase from Turkmenistan,” Bijan Namdar Zanganeh said in a meeting with Turkmen Vice President Khoja Muhammad Muhammadov in Tehran on Sunday.

He called on Iranian manufacturing companies to make the necessary arrangements for exporting more items to Turkmenistan.

Zanganeh also said Iran will continue to import natural gas from Turkmenistan at the existing level.

Last February, Iran’s Minister of Industry, Mine and Trade Mohammad Reza Nematzadeh said Iran and Turkmenistan have the capacity to double their trade exchanges to USD 10 billion.

A report by the Trade Promotion Organization of Iran on Iran-Turkmenistan trade relations shows that the two countries held six mutual cooperation meetings between 2001 and 2012.

The most important documents exchanged between the two countries were trade agreements on encouraging and supporting investment, agreements on avoidance of double taxation, and memoranda of understanding on business cooperation.