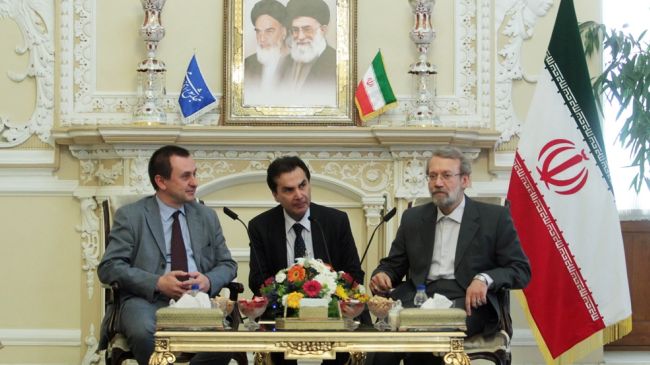 A top Italian senator throws his country’s weight behind talks between Iran and the six major powers, saying a final deal on the Islamic Republic’s nuclear energy program will play a key role in improving Tehran-Rome ties.

Italy supports the negotiations between Iran and the six powers and is keen that the talks will achieve a final result as soon as possible, the co-chairman of Iran-Italy parliamentary friendship group, Ettore Rosato, said in a Sunday meeting with Iran’s Majlis Speaker Ali Larijani in Tehran.

He added that a final nuclear agreement would be a major step toward enhancing relationship between Iran and Italy.

Larijani, for his part, commended Italy’s role on regional developments and said Iran backs cooperation with Rome on issues in which both sides share common interests.

He added that Iran needs peaceful nuclear energy to supply its demands given its geographical position, saying the country builds nuclear power plants to achieve this goal.

“Iran has never sought nuclear weapons and regards weapons of mass destruction as a threat to security of the region and the world,” Larijani said.

He further stressed the importance of bolstering bilateral parliamentary cooperation as an “effective and important” factor to strengthen relations in all fields.

“The existence of political will on the side of both countries’ officials will remove obstacles ahead of cooperation between private and trade sectors,” the top Iranian parliamentarian pointed out.

Over the past months, the Islamic Republic has received a number of parliamentary delegations from different countries in line with Tehran’s policy to further bolster its foreign relations.

Last week, a French parliamentary group led by Chairman of the French Senate’s Finance Committee Philippe Marini arrived in Iran to discuss the promotion of economic ties between Tehran and Paris with a number of Iranian lawmakers and cabinet ministers.