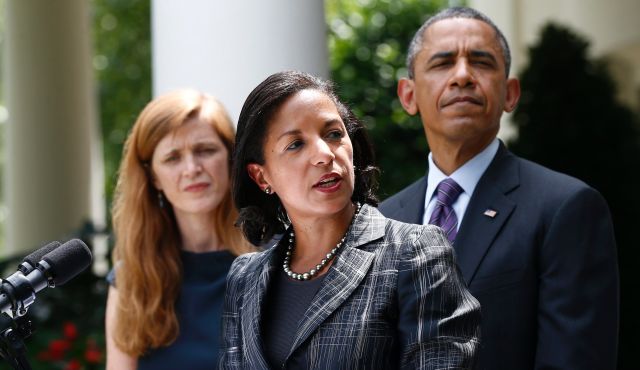 U.S. delegation to visit Israel ahead of renewed talks with Iran

U.S. National Security Adviser Susan Rice will visit Israel next week, against the background of an impending agreement between Iran and its international negotiating partners on the nuclear issue.

Rice, who will be making her first visit to Israel as security adviser, will be joined by Under Secretary of State for Political Affairs Wendy Sherman, who heads the American team at the talks with Iran. The American delegation is also expected to include senior representatives of the state department, White House, defense department and intelligence community.

Heading the Israeli team at the discussions, which are expected to focus on the Iranian nuclear program, will be National Security Adviser Yossi Cohen.

Rice’s visit comes in the wake of the unsuccessful peace negotiations between Israel and the Palestinians. Regarded as one of the people closest to PresidentBarack Obama, Rice has been a leading Administration skeptic regarding the prospects of U.S. success in persuading Netanyahu and Palestinian President Mahmoud Abbas to make the necessary compromises to reach an historic peace.

In recent weeks, she was instrumental in persuading the administration to reduce its involvement in the peace process due to the deadlock. Her position was decisive in Obama’s decision to declare a time-out in the peace talks.

Senior Israeli officials stressed that, despite Rice’s involvement in the Israel-Palestinian talks, her visit to Israel would focus primarily on the Iranian nuclear issue and other regional subjects, such as Syria and Egypt.

Rice will arrive in Jerusalem on May 8, only days before the beginning of the fourth round of talks in Vienna between Iran and the six countries negotiating on behalf of the world community – the U.S., Russia, China, the United Kingdom, France and Germany. Her visit is expected to last two days.

The Vienna talks, which will begin on May 13 and last about four days, are expected to be devoted to drafting the articles of the permanent nuclear agreement with Iran, in terms of which Iran will agree to substantially reduce its nuclear program in return for the lifting of international sanctions.

A senior Israeli official said that the discussions with Rice are intended to tighten the coordination between Israel and the U.S. in advance of the drafting of an agreement with Iran. Israel’s public position is to reject any compromise with Iran and demand total dismantling of all centrifuges, the underground enrichment facility in Qom, the heavy-water reactor in Arak and the stockpile of enriched uranium that Iran currently has in its possession.

With that, Jerusalem understands that considerable progress has been achieved in the talks and the chances of the sides reaching an agreement are higher than Israel initially estimated. As a result, senior Israelis believe that the time has come to ascertain via non-public channels how to ensure that the compromises made by the international powers as part of the agreement will be minimal and will serve Israel’s essential interests.

Of primary concern to Israel is a reduction in the number of active centrifuges that Iran is able to maintain under the permanent agreement. Israel is concerned that the international powers, primarily the U.S., are over-eager to reach an agreement with Iran and might, as a result, allow Iran to keep a large-scale centrifugal capability that would enable a speedy breakout to 90% uranium enrichment, which is necessary for the development of nuclear weapons.

In that regard, National Security Adviser Yossi Cohen, who will lead the Israeli team in the discussions with the Americans, recently returned from a secret visit to Beijing, where he met with a number of senior officials. The Iranian nuclear program was at the center of Cohen’s discussion. Israel is interested in having China oppose any relaxation of the terms that the powers will present to Iran as part of the permanent agreement.