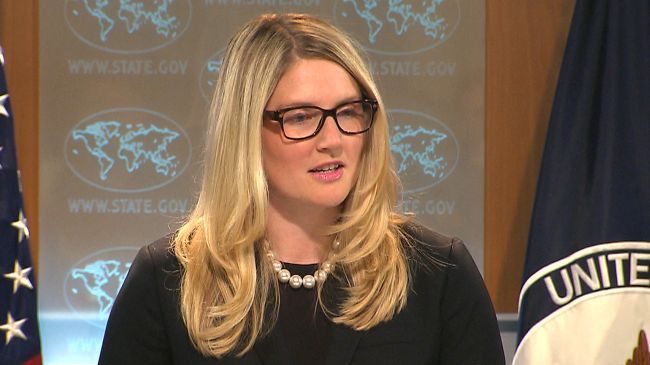 Talks about Iran’s nuclear issue in good faith: US

The United States says there is a “sense of realism” about the negotiations between Iran and the P5+1 over Tehran’s nuclear energy program, stressing the sides are holding talks in good faith.

“Well, I think we share a sense of realism here, but what we’ve said…we are all at the table, talking in good faith,” US State Department spokeswoman Marie Harf told a daily Press Briefing in Washington on Friday.

She added that all parties to the negotiations are committed to achieving the objectives of the talks and making the tough decisions but emphasized that “no one can say for certain right now.”

“But the fact that we are talking in a very business-like and substantive way about very detailed issues we’ve never talked at this level before – this is the best chance we’ve ever had to get this done diplomatically,” the spokesperson said.

She made the remarks in reaction to a recent article by Iran’s Foreign Minister Mohammad Javad Zarif for the journal Foreign Affairs, saying the ongoing nuclear negotiations face no “insurmountable” barriers. The only requirements are political will and good faith for the negotiators to “get to yes” and achieve the objective established by the Joint Plan of Action adopted in Geneva last November.

“The unexpectedly fast pace of progress in the negotiations so far augurs well for a speedy resolution of this unnecessary crisis and for the opening up of new diplomatic horizons,” Zarif said.