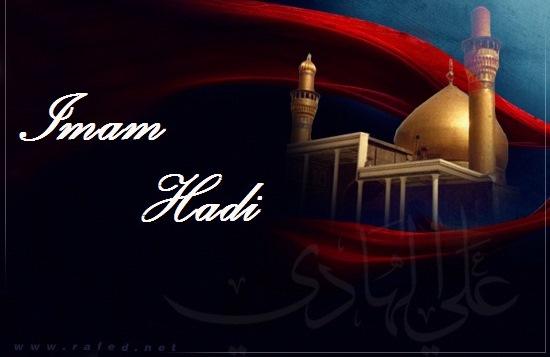 The period of Imamate of Imam Hadi coincided with the decline of the power of the Abbasid Empire. They were threatened by the Turks and had to move the Capital from Baghdad to Samarrah. He was only 6 years old when his father Imam Muhammad Taqi was martyred in Baghdad when poisoned by Mu’tasim Billah Abbasi.

Imam Hadi lived in Madina for the remaining 8 years of the reign of Mu’tasim and 5 years of the reign of Wathiq Billah. It was when Mutawakkil became caliph in 236 Hijiri (847 AD) the Imam was called over to the Abbasid capital Baghdad. Mutawakkil, was the cruelest and deadly enemy of the Ahlul Bayt, who tried to drown the Grave of Imam Husein – Shiites’3rd Imam – in Karbala’ by diverting the waters of the Euphrates River.

Caliph of the time kept Imam Hadi under house arrest in Samerrah. In the end Mutawakkil died in the hands of his protectors, the Turkish guards, and his son Muntasir became the next caliph and then Motamed became the caliph who martyred Imam Hadi.

The intelligence, intellectual abilities, and talents which Imam al-Hadi (a.s.) had in his childhood astonished the minds and amazed the intellect. He had a strong memory, excessive intelligence, and sharp wit. Historians have mentioned many examples of his intelligence.

He inherited solemnity and dignity from his fathers. The mien of prophets and brightness of guardians appeared on him, and no one of his enemies or followers met him unless he revered and respected him highly.

Abul Falah al-Hanbali says, ‘Abul Hasan bin ‘Ali al-Jawad bin ar-Ridha bin Musa al-Kadhim bin Ja’far as-Sadiq al-Alawi al-Husayni, who is known as al-Hadi, was a jurisprudent, worshipping Imam. He was one of the Imams whom the Shiite exaggerators believe to be infallible like prophets.’

The political life in the time of Imam al-Hadi (a.s.) was very bad. There was no security in all countries of the Islamic world. Anarchy was everywhere because the Abbasid government lost its authority and influence and no longer had its terrible power it had during the reigns of al-Mansur, ar-Rasid, and al-Ma’mun.

From the direct results of the domination of the Turks over the rule was the corruption of the rule and inadvertency. Bribe was widespread among the officials of the state. The viziers, walis, and clerks embezzled the monies of land taxes and other taxes and the yields that came to the state from different countries.

Imam al-Hadi (a.s.) became a heavy burden on al-Mu’tamid the Abbasid caliph after he saw people talk about the virtues, knowledge, asceticism, and piety of the Imam and prefer him to all other Muslim ulama’. He became angry, envious, and spiteful against the Imam His ill will led him to commit the worst crime in Islam.

He inserted fatal poison to the Imam, who, after having the poison, kept to bed. The poison reacted in all his body and he suffered intolerable pains. The Shiite and the notables of the state visited him, and the all were covered with deep sorrow.

Imam al-Hadi (a.s.) appointed his son Abu Muhammad al-Hasan (al-Askari) as the Imam after him and set him as the general authority for the Shiite after his death. He insinuated to his close companions about the Imamate of his son Abu Muhammad (a.s.) before. Imam al-Hadi (a.s.) entrusted his son Imam al-Hasan al-Askari (a.s.) with the procedures of funerals, prayer, and burial after his death, and recommended him of other recommendations concerning his affairs.

All those, who wrote about the life of Imam al-Hadi (a.s.), saw honor, dignity, knowledge, piety, and charisma in his great personality and showed their admiration and high regard for him. Here are some sayings of historians and scholars about him:

Abul Fida says, ‘‘Ali at-Taqiy (pious) is one of the twelve Imams of the Shiite. He is ‘Ali az-Zakiy bin Muhammad al-Jawad.’

Ibn as-Sabbagh al-Maliki says, “Someone of scholars said, ‘The virtue of Abul Hasan has established its domes on the galaxy, and stretched its ropes on the stars. No excellence is counted, unless with him is its conclusion, and no nobility is mentioned, unless with him are its details and totality, and no high quality is regarded, unless his proofs appear on it.

He deserved all that due to the essence of liberal qualities that he alone had, and glory that governed his lofty nature which was purified from any blemish, and so his nature and morals were pleHasant, his conduct was fair, and his qualities were virtuous. His gravity, calmness, certainty, chastity, honesty, and wit were like the Prophet’s and ‘Ali’s. He had a pure soul and high determination such that no one among men resembled him (in this respect), and he lived a coarse life of asceticism such that no human participated with him in it or looked forward to it.’

Al-Qutb ar-Rawandi says, ‘As for ‘Ali bin Muhammad al-Hadi, all qualities of Imamate have gathered in him. His virtue, knowledge, and good merits have been perfected. All his morals were extraordinary like the morals of his fathers. He spent the night worshipping, facing the Qibla, wearing a wool garment and sitting on a mat. If we mention his high qualities, the book shall be prolonged with them.’

A great researcher, Aagha Buzurg at-Tahrani says, ‘Imam al-Hadi (a.s.) was the best of his brothers. He inherited the knowledge and generosity of his fathers. The Imamate transferred, and was limited to him from among his brothers because he had fulfilled all the conditions of Imamate. The conditions of Imamate are knowledge, justice, qualifications, soundness of senses and organs that does not affect one’s determination and action, being Arab from Quraysh, besides being from the Hashemites.’