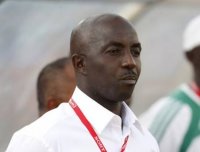 Former Super Eagles coach Samson Siasia has said that the Iranian national team, may be Nigeria’s toughest challenge in the group stages of the 2014 FIFA world cup championship in Brazil.

The Keshi-led team will play Iran in their first game of their campaign at the mundial in the summer.

Siasia expressed the need for the technical crew of the Nigerian national team to get a compilation of the videos of the world cup debutants so as to help with tactical strategies when they eventually clash.

“Now is the time for the compilation of videos and data that can truly reveal the Iranians” Siasia said in an interview with 365footballnews.com.

“I am not afraid of Argentina like I am of Iran. We really don’t know much about Iran and if you are going to fight an enemy, then you should know the kind of enemy you want to fight. You have to know their strength and weaknesses but what we know about Iran is zero”.

“As far as I am concerned, that will be the most difficult game we are going to play because we don’t know them much”

Nigeria is in Group F together with Iran, Argentina and Bosnia-Herzegovina and Stephen Keshi is expected to navigate the team through to the knock-out stages.