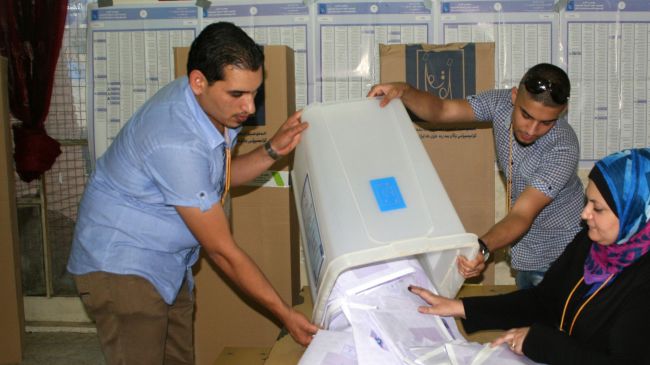 Iraqi election commission officials count votes at a polling station in a district of the Iraqi capital Baghdad on April 30, 2014.

Tehran has extended felicitations to the Iraqi people and government on the country’s landmark parliamentary elections.

On Wednesday, Iraq witnessed its first parliamentary vote since US forces withdrew from the country in 2011, after nearly a decade of invasion.

According to officials, some 60 percent of more than 20 million eligible Iraqis went to the polls to choose new lawmakers for the country’s 328-seat legislative body.

“This turnout shows that terrorism has no place in the future of Iraq,” Amir-Abdollahian said, referring to the mass participation of the Iraqi people in the vote.

He further said that relations between Iran and Iraq are strategic and “serve regional peace, stability and security.”

The election in the Arab country was held despite threats by al-Qaeda-linked militants to ruin the election process.

Vote counting has been underway since polls closed earlier in the day.

Iraq has witnessed a surge in deadly attacks, including bombings and shootings, in recent months.

Iraq’s Interior Ministry says Takfiri militants have launched an open war in the Middle Eastern country and they want to push it into chaos.