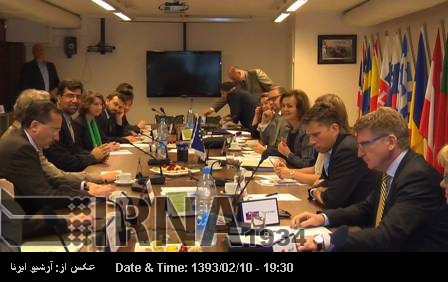 Beirut, April 30, IRNA – A number of EU membersˈ ambassadors to Lebanon on Wednesday met and conferred with Ghazanfar Roknabadi, Iranian ambassador to Beirut on the latest regional issues.

The meeting called by envoy of the European Union to Lebanon, Mrs Angelina Eichhorst, was held at EU office in Beirut.

Embassies of a number of EU member states, including Germany, the UK, Greece, Netherland, Finland, Belgium, Spain, Cyprus, Romania, Austria, Denmark, Italy, Sweden, Slovakia and Poland had sent their ambassadors or other diplomats to the meeting.

During the meeting, the Iranian ambassador talked about practical ways to put an end to regional conflicts, including crises in Syria and Palestine.

Roknabadi briefed the EU diplomats on Iranˈs achievements in the fields of science, technology and military and on the course of nuclear talks between Iran and the six world nations, known as P5+1.

Referring to a terrorist bombing in front of Iranian embassy in Beirut last year, Roknabadi underlined the role of international community in stopping terrorist acts of Takfiri groups against civilians in Syria and Lebanon.

He criticized double standards of certain countries towards regional issues, accusing them of supporting the interests of the Zionist regime.

He said halting financial and arms support for terrorist groups is central to settlement of Syrian crisis.