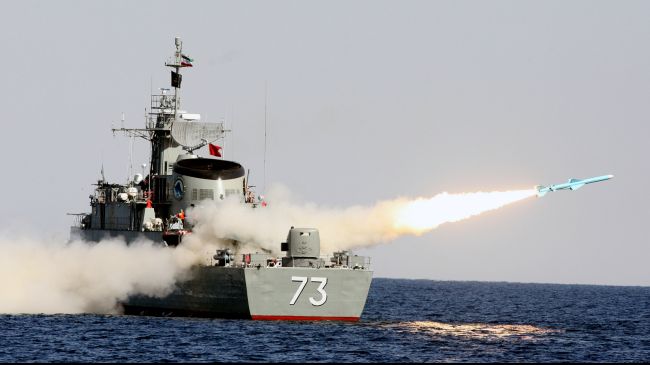 US presence in Persian Gulf source of insecurity: Iran cmdr.

An Iranian vessel launches a missile on the fifth day of the six-day naval drills dubbed Velayat 91 in southern Iran, January 1, 2013.

The commander of the Islamic Revolution Guards Corps (IRGC) Navy says the United States’ military presence in the Persian Gulf is a source of “insecurity” for the region.

“Today, under the guise of safeguarding regional and energy security, the Americans have a [military] presence in the Persian Gulf; but, history has shown that not only don’t they have the power to do so but they are themselves an element of insecurity,” Rear Admiral Ali Fadavi told Fars News Agency on Monday.

The senior Iranian military commander further underlined the IRGC’s full preparedness to defend Iran’s interests in the strategic Strait of Hormuz and the Persian Gulf.

Rear Admiral Fadavi also touched upon the US military threats against the Islamic Republic and said, “During the last several years, the Americans were by no means in the position to even raise threats such as military action against Iran; they brought up political issues, but on the military level, they don’t have the capability.”

In an interview with Bloomberg Viewi in March, US President Barack Obama repeated Washington’s threat that “all options are on the table” regarding Iran’s nuclear energy program, claiming that the Iranians “take it seriously.”

In recent years, Iran has secured great breakthroughs in its defense sector and attained self-sufficiency in producing essential military equipment and systems.

Tehran has repeatedly said its military might poses no threat to other countries, insisting that its defense doctrine is based on deterrence.