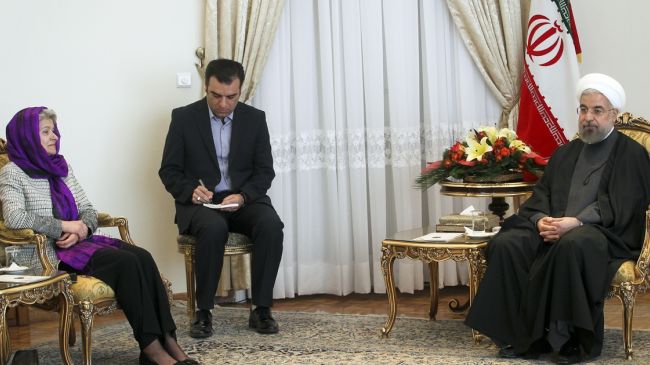 Iran’s President Hassan Rouhani says UNESCO should promote the culture of dialog and boost media cooperation among different countries to prepare the ground for moderation and the establishment of a world free of violence.

“The first and most important step to fight violence, extremism and terrorism is the cultural step and the United Nations Educational, Scientific and Cultural Organization (UNESCO) can play a valuable role in this regard,” Rouhani said in a meeting with UNESCO Director General Irina Bokova in Tehran on Tuesday.

The Iranian president added the UN General Assembly’s unanimous vote to his idea of a World Against Violence and Extremism (WAVE) showed that other countries need such an approach.

On December 18, 2013, the UN General Assembly overwhelmingly voted to approve Iranian President Rouhani’s WAVE proposal, which calls on all nations across the globe to denounce violence and extremism.

Rouhani praised the presence of the Palestinians’ representative in the UNESCO delegation and said it would help establish peace in the Middle East.

“The Middle East region has suffered greatly from violence, extremism and terrorism over the recent years and it is necessary to restore peace and stability to the region with each other’s help” the Iranian president stated.

He criticized bids by certain world powers to destroy nations’ cultural identity and said such moves emanate from an “incorrect thought” because countries’ identity and culture would lead to their stability and strengthen social relationships.

He further expressed regret over the current “scientific apartheid” in the world, saying countries which possess modern technologies refrain from providing them to other nations due to their own economic interests.

Bokova, for her part, said President Rouhani’s WAVE proposal was invaluable and based on UNESCO’s mission and objectives.

UNESCO would seek to explain the significance of dialog and peaceful coexistence to people across the world, she added.