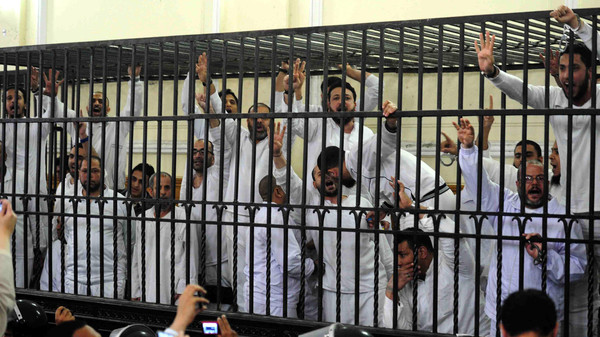 Iran on Tuesday warned that the 683 death sentences handed down by an Egyptian court to suspected Islamists could add to a deteriorating situation in the country.

The verdicts passed on Monday in Cairo amid a crackdown on supporters of ousted Islamist president Mohammad Mursi were condemned by the United States and the United Nations.

“Issuing such verdicts could have many social and political consequences and encourage Egypt’s enemies to exploit the current situation,” Afkham said at a news conference.

The White House said that the court’s decision defied “even the most basic standards of international justice,” calling for it to be reversed.

U.N. Secretary General Ban Ki-moon was “alarmed” by the death sentences and feared they could have an impact on the entire region, his spokesman said.

Iran and Egypt broke off relations after the Islamic revolution in 1979, which was later followed by a peace treaty between Cairo and Israel.

During Mursi’s one year presidency, ties flourished between Egypt and Iran, on the belief in the Islamic republic that the ousted president would usher in an Islamic awakening.

However since Mursi’s ouster ties between Iran and Cairo’s interim military government have become frosty.

According to the United Nations, more than 170 people have been executed in Iran since the beginning of 2014.