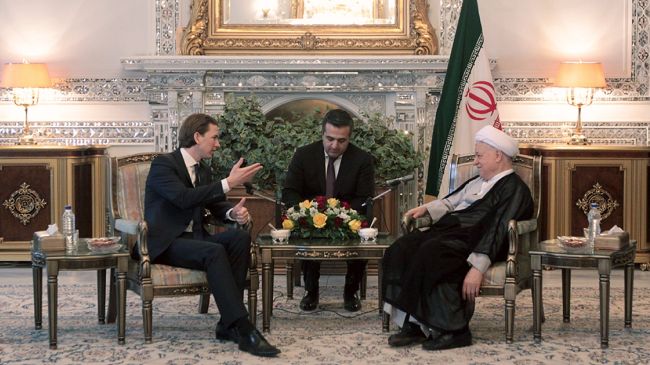 Chairman of Iran’s Expediency Council says ground is prepared for a final settlement to the decade-old dispute over Iran’s nuclear energy program.

“Should the West want to resolve the issue technically, it would not take a long time because ground is ready for a final agreement,” Ayatollah Akbar Hashemi Rafsanjani said in a meeting with visiting Austrian Foreign Minister Sebastian Kurz in Tehran on Monday.

He added the negotiations between Iran and the six major world powers over Tehran’s nuclear issue are not complicated in principle, noting that Tehran is hopeful of a bright prospect for the talks.

“Iran, given its religious and humanitarian beliefs, has repeatedly stated that it renounces the adverse outcomes of nuclear arms, and does not seek confrontation with world countries in the pursuit of its political objectives,” Rafsanjani pointed out.

The Leader described the proliferation of nuclear weapons as “senseless, destructive and dangerous,” adding that the Iranian nation has never sought and will never seek atomic bombs as the country already has the conventional capacity to challenge the nuclear-backed powers.

Kurz, for his part, expressed pleasure over Vienna’s hosting talks over Tehran’s nuclear energy program, stating that his country hopes the negotiations would bear favorable results.

Iran and the five permanent members of the UN Security Council – the US, France, Britain, Russia, China – plus Germany reached an interim deal on November 24, 2013, in the Swiss city of Geneva to set the stage for the full settlement of the dispute over Iran’s program. The deal took effect on January 20.

Iran and its negotiating partners wrapped up their latest round of high-level nuclear talks in Vienna on April 9. The two sides agreed to meet again in the Austrian capital on May 13.