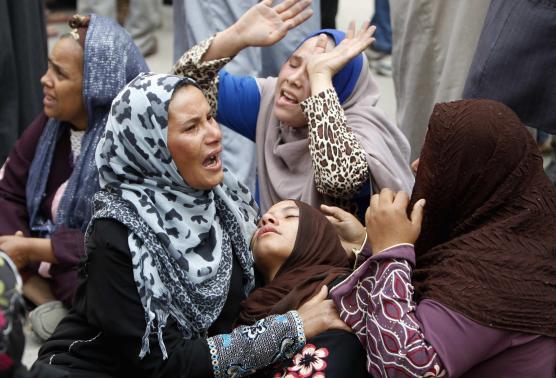 Relatives and families of members of Muslim Brotherhood and supporters of ousted President Mohamed Mursi react after hearing the sentence, in front of the court in Minya, south of Cairo, April 28,2014.

(Reuters) – An Egyptian court sentenced the leader of the outlawed Muslim Brotherhood and 682 supporters to death on Monday, intensifying a crackdown on the movement that could trigger protests and political violence ahead of an election next month.

The Brotherhood, in a statement issued in London, described the ruling as chilling and said it would “continue to use all peaceful means to end military rule”.

An Islamist alliance that includes the Brotherhood called on Egyptians to demonstrate against the death sentences in the streets of Cairo on Wednesday.

In another case signaling growing intolerance of dissent by military-backed authorities, a pro-democracy movement that helped ignite the uprising that toppled autocrat Hosni Mubarak in 2011 was banned by court order, judicial sources said.

The death sentence for Mohamed Badie, the Brotherhood’s general guide, will infuriate members of the group, which has been the target of raids, arrests and bans since the army forced President Mohamed Mursi from power in July.

The United States and the United Nations expressed alarm over the ruling.

Some Brotherhood members fear pressure from security forces and the courts could drive some young members to violence against the movement’s old enemy, the Egyptian state.

Islamist militants based in the Sinai Peninsula have stepped up attacks against security forces since Mursi’s overthrow, killing hundreds.

On Monday night, Cairo authorities found two bombs that were planted in the car of an army officer, security officials said.

Badie, considered a conservative hardliner, was charged with crimes including inciting violence that followed the army overthrow of Mursi, who is also on trial on an array of charges.

The slight, 70-year-old veterinary professor stood trial in Cairo in a separate case hours after the sentence was affirmed.

“If they executed me one thousand times I will not retreat from the right path,” Badie was quoted as saying by lawyer Osama Mursi, who attended one of his trials in Cairo.

The comments were published on the Facebook page of Osama Mursi, son of the Brotherhood leader ousted as president.

Tough measures against the Brotherhood suggest the authorities still see it as a major threat, even though most of its leaders and thousands of members are behind bars.

Authorities are well aware that the movement founded in 1928 has survived repression under successive Egyptian autocrats.

The White House said it was “deeply troubled” by the ruling.

“Today’s verdict, like the one last month, defies even the most basic standards of international justice,” it said in a statement. Secretary of State John Kerry would raise U.S. concerns in a meeting with the Egyptian foreign minister on Tuesday, Kerry’s spokeswoman said.

The Obama administration said last week that it would partly resume military aid to Egypt, six months after cutting off the assistance in the wake of Mursi’s ouster. The administration is delivering 10 Apache helicopters to Cairo and has notified Congress of its intention to send $650 million in aid for weapons systems used for border security, counterterrorism, anti-smuggling and non-proliferation.

Some U.S. lawmakers said they were closely reviewing the decision to send Egypt the money, saying they wanted to know for certain who would use the money – and how.

“I want to find out, are they going to have a legitimate election? I’m not going to invest in a country that’s in a state of anarchy,” U.S. Senator Lindsey Graham, the top Republican on the Senate subcommittee that oversees foreign aid, told Reuters.

Responding to the critical U.S. comments, the Egyptian Embassy in Washington said the cases “are unfolding under an independent judiciary, a core foundation of all democracies.

“The Executive branch therefore cannot intervene in this judicial process or otherwise undermine its independence,” the embassy statement said. “These decisions are only a first step in a legal process involving different stages for appeal. Egypt’s prosecutor general has initiated the procedures necessary to appeal these decisions.”

The Brotherhood, believed to have about 1 million supporters in the nation of 85 million, has vowed to topple the government through protests.

Reacting to what it called the “chilling” court ruling, the Brotherhood said the world can no longer afford to stay silent.

“The Muslim Brotherhood reaffirms it will continue to fight relentlessly for freedom and democracy in Egypt, and continue to use all peaceful means to end military rule and achieve justice for the Egyptian people,” the group’s London office said in an emailed statement.

In a separate case, a court affirmed death sentences on 37 others. The rulings were part of a final judgment on 529 Muslim Brotherhood supporters condemned last month. The remaining defendants were jailed for life, judicial sources said.

Death sentence recommendations in the case involving Badie will be passed on to Egypt’s Mufti, the highest religious authority. His opinion can be ignored by the court. The rulings can be appealed. Many defendants are on the run.

Mass trials in the biggest Arab state have reinforced fears among human rights groups that the government and anti-Islamist judges are using all levers of power to crush opponents.

“It seems that these sentences are aimed at striking fear and terror into the hearts of those who oppose the interim government.”

The political turmoil that has gripped Egypt and a fast-growing Islamist insurgency have harmed the economy, which grew by a meager 2.1 percent last year.

“In a month, Egypt sentences more people to death than the rest of the world combined. It is not the kind of news to rekindle confidence,” Angus Blair, chairman of business and economic forecasting think-tank Signet, wrote on Twitter.

As word spread of the death sentences, relatives screamed and cried outside the court in the town of Minya.

Others collapsed on the street as soldiers with AK-47 assault rifles standing on an armored vehicle looked on.

Relatives blamed Abdel Fattah al-Sisi, the general who deposed Mursi. The former head of military intelligence under Mubarak is expected to easily win presidential elections on May 26-27 in a country long ruled by men from the military, Mursi’s time in office representing the rare exception.

Some people chanted: “Sisi is ruling like a king” and “May God punish you for what you did”.

Authorities have extended a crackdown to secular activists.

A ruling on Monday banning the activities of the April 6 movement follows the imprisonment of three of its leading members last year on charges of protesting illegally. Charges against April 6 included “damaging the image of the state”.