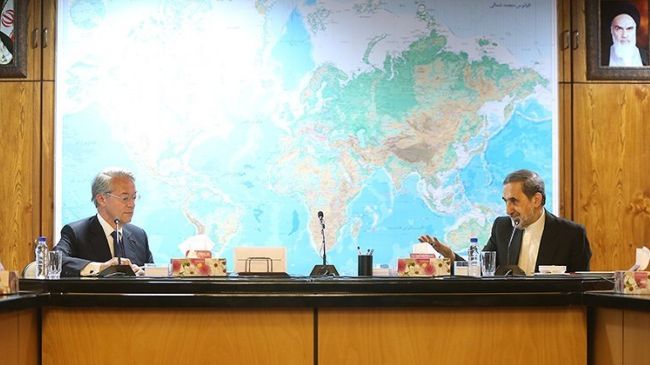 A senior Iranian official says France has expressed readiness to overcome the existing obstacles in the way of Tehran-Paris economic cooperation and improve such relations.

On Sunday, Ali Akbar Velayati, an advisor to Leader of the Islamic Revolution Ayatollah Seyyed Ali Khamenei, met with a French parliamentary team led by Chairman of the French Senate’s Finance Committee Philippe Marini in Tehran to discuss the promotion of Tehran-Paris economic ties.

Following the meeting, Velayati said the delegation expressed Paris’ preparedness to “increase the volume of economic ties with Iran and remove the financial and banking obstacles to such relations.”

The Iranian official further said he had also exchanged views with the French parliament officials on issues of bilateral, regional and international significance, including the developments in Ukraine, Syria, Lebanon and Iraq.

According to Velayati, the two sides also discussed the ongoing talks between Iran and the P5+1 group – Russia, China, France, Britain, the US and Germany – over Tehran’s nuclear energy program.

“Both sides agreed we should move in a direction which would see nuclear negotiations bear positive results within the framework of international regulations,” the Iranian official stated.

In a meeting with Iranian Minister of Industry, Mine and Trade Mohammad Reza Nematzadeh in Tehran on April 24, Marini called for the resumption of the activities of French companies in Iran and interactions between medium and large enterprises in the two countries.

In mid-February, a French delegation of more than 100 businessmen from various sectors of its industry, including its banking, telecommunications and shipping sectors, visited Tehran.

It was the biggest economic delegation that France had sent to the Islamic Republic since the 1979 victory of the Islamic Revolution in Iran.