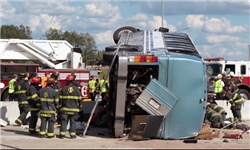 Nasim—A fatal bus accident in Azadegan Freeway of Tehran claimed 7 lives, including 5 women and left 26 wounded, five of the injured are reported to be in critical condition.

On Monday morning, a bus was overturned after the driver hit a traffic barrier while taking turn onto the on-ramp near the Hakim Expressway.

Preliminary reports indicated that the tragic accident was probably caused by technical problems as the bus was moving slowly to overturn. Although the authorities refrained to comment and stress that the reports will be released after investigations.