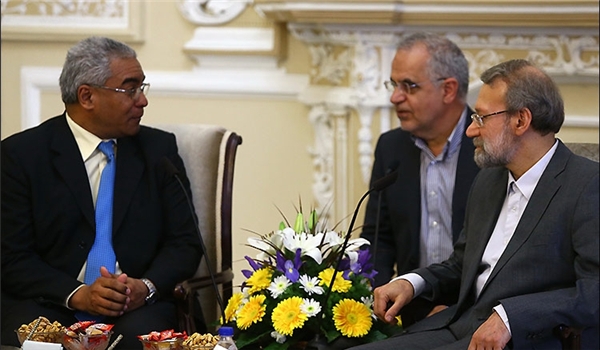 TEHRAN (FNA)- Iranian Parliament Speaker Ali Larijani underlined that Syria needs to hold presidential elections in a bid to guarantee restoration of peace and stability in the country.

“Holding free elections and respecting the Syrian people’s vote and view is an important step for the establishment of stability and tranquility in the country,” Larijani said in a meeting with Cuban Envoy to Iran Vladimir Andres Gonzalez Quesada in Tehran on Wednesday.

The Cuban ambassador, for his part, referred to the regional developments, specially the Syrian crisis, and said, “Cuba is opposed to any foreign interference in Syria.”

During the meeting, the two officials also discussed ways to further expand the relations between Tehran and Havana in the different economic, cultural and parliamentary fields.

Larijani also stressed the importance of continued consultations between the two countries in various arenas.

Elections in Syria are scheduled for June 3. Last month, the Syrian parliament passed a new law on elections stipulating a presidential candidate must be backed by at least 35 members of country’s Legislative Assembly. He should also be not younger than 40 and must have lived in Syria for the last 10 years.

Assad was unanimously nominated by the Syrian parliament for president in 2000 following the death of his father, former President Hafez Assad. He was re-elected in 2007 to a second term after receiving 97.62 percent of the votes.

He has not yet announced if he will be running for reelection.

“Holding elections and deciding about the Syrian people’s fate through the ballot box has received the Islamic Republic of Iran’s support since the very first day of the crisis in Damascus and Iran has always wanted to strengthen this idea,” Parliament’s Director-General for International Affairs Hassan Sheikholeslam said on Tuesday.

He said that the demands from Assad to delay the elections by those countries which claim to be advocates of human rights are a conspiracy to complete their plots against the Syrian people.

“But Bashar al-Assad wisely seeks to have an antidote for such plots by holding elections,” Sheikholeslam said.