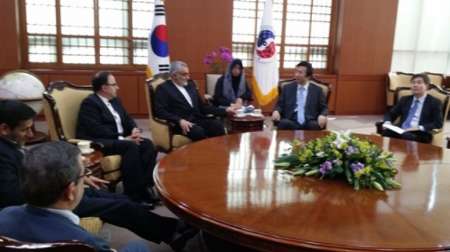 The two officials discussed latest regional and international developments and agreed to expand mutual ties in all fields and the economic cooperation in particular.

During the meeting, Boroujerdi expressed condolences to South Korean foreign minister over the ferry disaster in which two hundred schoolboys died.

On the humanitarian crisis in Syria, Boroujerdi said that foreign supporters of terrorist groups in Syria have a share in the destruction and bloodshed.

The senior MP said that the western governments violated the international law and inflicted heavy damages on Iranian economy under the pretext of the national nuclear program.

Boroujerdi said that Geneva interim nuclear agreement struck last November is the outcome of Iranˈs resistance to the arbitrary sanctions.

He said that Iranian parliament would support any final agreement that guarantees Tehranˈs right for peaceful use of nuclear energy.

Tehran is ready to mediate between South and North Korea, he added.

Boroujerdi heading a delegation arrived in Seoul on Tuesday night for an official visit.