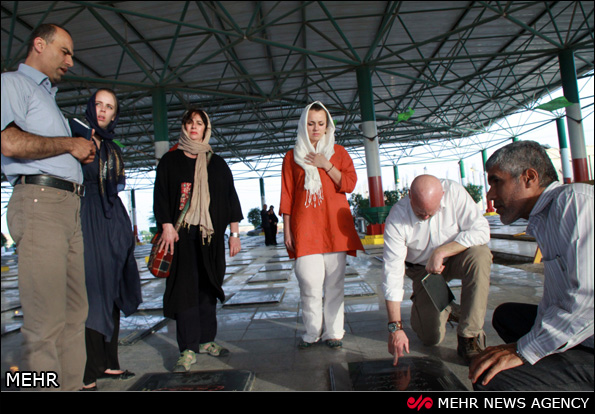 TEHRAN, April 22 (MNA) – The UNODC Regional Representative Centre for East Asia and the Pacific has toured Iran’s southern war fronts along with his wife and two daughters.

Gary Lewis visited for two days war fronts in Abadan and Khorramshahr. Their visit was commissioned by attempts of war invalids in Tehran Museum of Peace.

The first visit brought Gary and his family to Khorramshahr’s Museum of War. They were informed by a narrator about the 45 days of fierce battle over the city; then, they went to the city’s congregational mosque and the memorial place of Shalamcheh martyrs and fount out more about the battle which pushed back the Baathist army.

The memorial place of Shalamcheh martyrs

The next stage of the visit brought Gary’s family to Khorramshahr’s Marine Industries Co. and closely saw the different stages of constructing huge oil platforms for South Pars and Assaluyeh by Iranian expertise and technology.

Garry Lewis also visited the home of a prisoner of war, Mola Saleh Qari, and asked him about the epic-scale adventure (23 people and 1) which Gary had seen before in a documentary.

Garry’s family posing in a photo with Qari’s family

Garry’s agenda for this visit also included a tour of war fronts in Abadan when under siege by Iraqi army along with live narration by Maki Yaze’ the author ofChildren of Kafisheh and translation by Dr. Shahriar Khateri ( the head ofSociety for Chemical Weapons Victims Support – SCWVS) in Zulfiqari Alley, Arvand Riverside fronts, and Daryaqoli Sq.

Garry and his wife and two daughters then attended Abadan’s martyrs cemetery and paid homage to them and also spoke to family of martyr Mousavi, former commander of Khorramshahr IRGC forces.

The first day of the visit ended with a visit to a workshop where the entrance gates of shrines of two Shiite Imams (10th and 11th Imams) was being produced.

In the second day of the visit, Garry and his family were in Arvand Kenar region and were given comments on the impact of war in contributing to an environmental crisis (water salinity and devastation of date plantations) and also attended the memorial venue for martyrs of Operation Valfajr-8 in before Fav in Iraqi side of the border to find out more of the battle fought.

Garry and family visiting workshop where entrance gates in Abadan

In visiting Abadan Refinery, Garry and his family was informed about the process to construct the refinery and the role played by its workers in defending the borders in early stages of war. Moslem Rahimi, the Refinery directing manager commented.

The last item in the agenda for Garry and his family was visiting Shadegan wetland and joint Iran and the UN projects to revive the wetland.

Garry Lewis and his family shared their experiences of two-day visit with Iranian audience in a program in Iran’s state TV’s local station in Abadan. The program will be aired by Khuzestan provincial station and TV’s channel 1 as well.