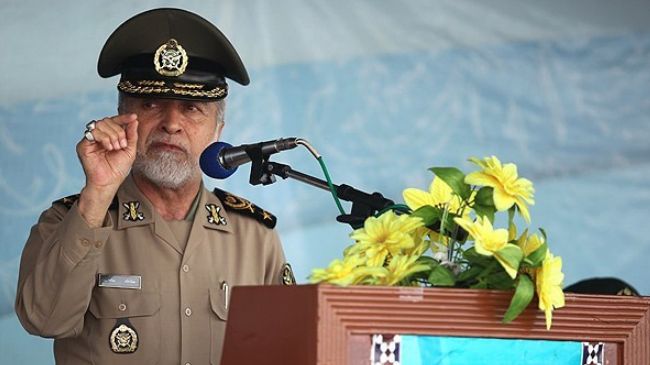 TEHRAN (Tasnim) – Iran, like many countries in the world, will not bargain over its deterrent power, Iranian Army commander underlined, and added that the country’s annual military wargames will be held as scheduled.

Speaking to the Tasnim News Agency on Monday, Major General Ataollah Salehi reiterated that Iran will never bargain over its defensive might and deterrent capabilities with the other nations.

Asked about the course of nuclear negotiations between Iran and the six major world powers (the five permanent UN Security Council members plus Germany) and the demands raised by them over Iran’s military activities, the senior commander said, “No country bargains over its defensive might and deterrent power. The team of nuclear negotiators is well aware of all issues and affairs.”

He made the comments in reaction to the sporadic discussions raised by certain countries engaged in the nuclear talks, which have called for discussions on Iran’s ballistic missile capabilities and even a slowdown in the military exercises held by Tehran.

Major General Salehi underlined that the country’s annual military exercises will remain firmly in place, and added, “Our wargames have never been and will never be restricted, and as we have increased our defensive and deterrent capability without reliance on the foreign powers so far, we will also manufacture new equipment by relying on our own local capabilities hereafter.”

The top commander also announced that a series of “joint drills” will be staged in the current Iranian year (started on March 21) by the Army and the Islamic Revolution Guards Corps (IRGC).

“This year’s wargames will have greater variety and be more advanced than the previous years,” Salehi explained.

He said the Army and the IRGC forces will reciprocally participate in each other’s planned wargames in the current Iranian year.

In relevant comments earlier this month, Commander of the Iranian Army Ground Force Brigadier General Ahmad Reza Pourdastan announced that his forces are scheduled to stage 4 military drills during the current Iranian year, two of which he said are expert wargames.

Two of the planned drills will be held in Iran’s southeastern and southwestern regions respectively, Pourdastan explained, adding that the entire units of the armored, artillery, airborne and Unmanned Aerial Vehicle (UAV) divisions will participate in the exercises.

He also unveiled plans for another two “expert” drills.

For the first time, the ground forces will stage an “expert drone wargame” either in the Aliabad region, near the central city of Qom, or in the central province of Isfahan, the commander noted.

And the fourth wargame on the agenda includes an “expert cyber drill”, he added.