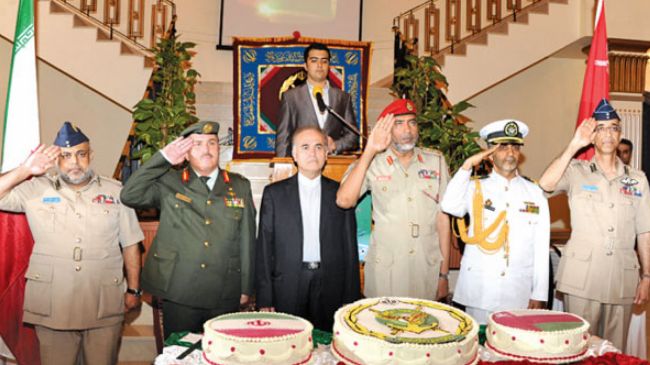 Iran’s military attaché to Oman has hailed Tehran-Muscat defense ties, saying military cooperation between the two countries can strengthen peace and security in the Middle East.

“Military relations between the Islamic Republic of Iran and the Sultanate of Oman have been on the basis of brotherhood and dignity in the past decades,” the Times of Oman daily quoted Captain Mohammad Reza Pourjassem as saying on Tuesday.

The Iranian military official made the remarks at a ceremony held in the Iranian Embassy in Muscat to mark Iran’s National Army Day, which falls on April 18.

Pourjassem further pointed to the formation of the Iran-Oman joint military committee, the holding of joint naval drills and the exchange of military cadets between the countries, stressing that such ties are proof of “strong” Tehran-Muscat military cooperation.

Iran-Oman military ties can help the establishment of peace and security in the region, said Pourjassem, adding, “Fortunately, the intention of the leaders of both countries is to maintain friendly relations.”

The Iranian military attaché to Oman also praised Iran’s defense might and said the Iranian Armed Forces are capable of defending the country’s independence and territorial integrity without relying on foreign countries.

On April 11, the 11th meeting of Iran-Muscat joint military committee was held in Muscat in the presence of the two countries’ high-ranking military commanders, who exchanged views on ways to improve bilateral military cooperation.

On the same day, the two neighboring countries held a joint rescue and relief naval drill in the Sea of Oman.

Iran and Oman have so far held several naval relief and rescue drills aimed at enhancing readiness for providing relief services and rescue operations, improving the level of regional cooperation and exchanging experience.