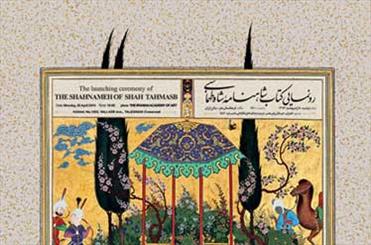 Minister of Culture to unveil Shahnameh of Shah Tahmasb

TEHRAN, April 21 (MNA) – The Academy of Art will host the ceremony held to unveil a version of Shahnameh (Firdausi’s The Epic of Kings) called ‘Shah Tahmasbi’ on April 27.

Mehr News reported that Ali Jannati, Minister of Culture and Islamic Guidance, Ali Moallem Damghani, the state official poetaster and the head of Academy of Art, Mehdi Hosseini, and a number of other literary figures would attend the ceremony.

Shahnameh incorporated 116 images, cover, introduction cover, epigraph, and other illuminations of the Musuem of Contemporary Art along with 33 images of Metropolitan Museum of London; 10 images from Khalili’s private art collection in London; 9 images from Aghakhan Foundation; 3 images from Qatari Museum of Islamic Art; 13 images from Shahnameh’s text (calligraphy and tables), and 1 image from Reza Abbasi’s private museum in Tehran.

Each image has descriptions in Persian and English. Damghani, Mahmoud Farshchian, and Ali Jannati had written introductions for the collection. The book has been published by Academy of Art press in 420 pages in hardback.

The book is the result of years of scholarly research work sponsored by Pasargad Bank and Tehran Museum of Contemporary Art.

The unveiling ceremony could be reached at Academy of Art in No. 1552, Vali Asr St., next to Taleghani Junction, 16 hours local time in Tehran.