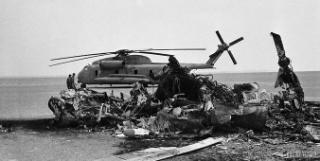 Tehran, YJC. The legislative branch is considering a law to oblige government to estimate the damage Iran suffered from the failed US airborne 1980 operation.

Member said that the Majlis National Security and Foreign Policy Committee is preparing a bill which will oblige the government to calculate the damage done to Iran by US Operation Eagle Claw of 1980.

Lawmaker Mansour Haqiqatpour in interview with the Islamic Consultative Assembly News Agency stated “There’s a bill that will oblige ministries of foreign affairs and defense to investigate the damage of the US invasion on Tabas.”

On April 24, 1980 the US Air Force dispatched a fleet to rescue US diplomats in Iran’s custody following the hostage crisis.

The operation failed as a sandstorm grounded the fleet and left a few dead or wounded.