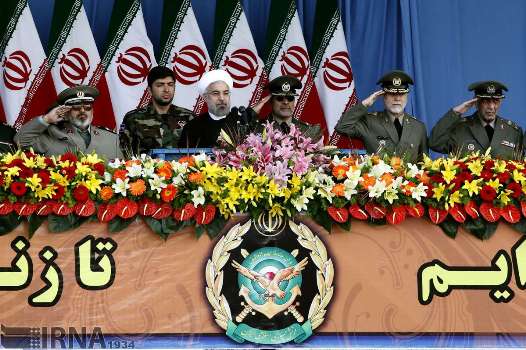 Iran says will firmly deter any attacks as military displays might

(Reuters) – Iranian President Hassan Rouhani said the Islamic Republic had the might to deter any attacks as its military displayed a range of drones and missiles at an annual parade in Tehran, state television reported on Friday.

Unlike hardline predecessor Mahmoud Ahmadinejad, Rouhani did not use his speech to lash out at the United States and Israel, which Tehran refuses to recognize.

“We told the world during the (nuclear) talks and we repeat that we don’t support any aggression … We support dialogue,” Rouhani said in the live broadcast.

“We don’t attack any country and don’t want war but we will firmly confront any aggression against Iran,” he said, as helicopters and fighter jets flew overhead and parachutists landed in the parade area in the south of the capital near the shrine of revolutionary leader Ayatollah Ruhollah Khomeini.

Rouhani, whose election in June paved the way for a major thaw in ties with the West, was referring to the talks with six major powers to hammer out a permanent agreement aimed at resolving the decade-old nuclear standoff.

Under a November preliminary agreement between Iran and the world powers, that took effect on January 20, Iran is to scale back its nuclear activities in exchange for initial relief from international trade and financial sanctions.

The next meeting between Iran, the United States, France, Russia, Germany, China and Britain is set for May 13 in Vienna, where they will start drafting the final agreement.