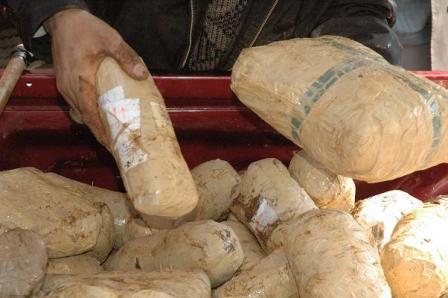 Some 408 kg opium seized in Isfahan

According to the Islamic Republic of Iran Police provincial commander, General Abdolreza Aqakhani, while controlling the vehicles on an access road in the province, the police forces got suspicion of two Peugeot cars and ordered them to stop but ignoring the order, the drivers tried to run away.

However, the police eventually stopped them and after full examining of the vehicle, they discovered some 169 kilograms of opium from one of them, he said, noting that three other Peugeots cooperating with the band attempted to change their path to flee the scene, but the police forces in a strike operation halted them and seized some 239 kilograms of opium from two of them.

Iran spends billions of dollars and has lost thousands of its police troops in the war against traffickers. Owing to its rigid efforts, Iran makes 81 percent of the worldˈs total opium seizures and has turned into the leading country in drug campaign.