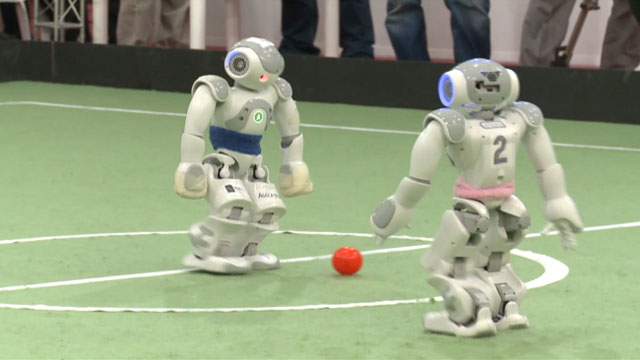 Tehran: Iran may be lumbered with economic sanctions but that did not stop a local team of robotics experts from sweeping aside German and Dutch rivals in football’s RoboCup.

In an event that could be considered just a fun distraction if it weren’t for all the hard work involved, the annual tournament drew an international field of competitors last weekend.

On a green felt carpet, five teams — three German, one Dutch and the other Iranian — contested RoboCup’s 9th edition in Tehran, with the robots trying to prod a red ball into the back of their opponent’s net over two 10-minute halves.

Standing just 60 centimetres (24 inches) tall, the key factor in the match — unlike in everyday electronic games — the robots are pre-programmed by their human masters ahead of kick-off.

“The robots are completely autonomous — we don’t have any control on the game and they make their own decisions,” said Novin Sharhoudi, 20, a student of software and computer engineering at Qasvin Azad University, northwest of Tehran.

And unlike professional sport in which money can buy the best players, the RoboCup teams used identical machines designed by Aldebaran Robotics, a French company that also provided raw technical data for the programmers.

Each robot is equipped with two cameras — one on its head and the other on its chin — to see the ball and communicate with team mates via wireless networking.

Local MRL (Mechatronics Research Laboratories) team came out on top, even though all aspects of life in Iran are clouded by international sanctions imposed as punishment for its disputed nuclear programme.

“We don’t get all the upgrades, we can’t buy robots or some components and the company was not in Tehran during the event so we can’t repair the robots,” said Sharhoudi.

And just as in the beautiful game itself, no plan survives the opening whistle.

By The News Tribe