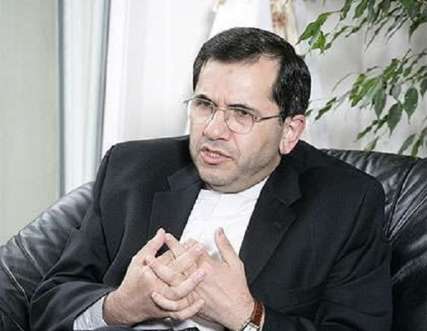 Tehran, Apr 16, IRNA – Deputy foreign minister for EU and American affairs said here Tuesday 4 installments of Iranˈs blocked oil sale resources have been freed according to Geneva deal and Central Bank of Iran has no problem in having access to those monetary properties.

Member of the Iranian nuclear negotiation team Majid Takht-e Ravanchi who was speaking with IRNA on the sidelines of a commemoration service for former President Seyyed Mohammad Khatamiˈs father-in-law said that in addition to those four installments a fifth one, too, was to be freed today, which needs to be surveyed and confirmed.

IRNA asked whether there have been any delays in Iranˈs access to the released hard currency as some circles have speculated.

Takht-e Ravanchi said that at any rate, in this case too, like any other banking system function in the beginning of the job a certain period of time is consumed to get the system rolling, but otherwise the Central Bank has had quite free access to the countryˈs freed assets.

According to the IRNA Political Desk, the Planning and Strategic Supervision Vice President Mohammad-Baqer Noubakht had said on Sunday that the five received installments of the freed money of the country at the disposal of Iran have summed up to US $4.2 billion so far.

He said that the occurred delay in getting access to the freed assets was due to the administrative process, and the speculations otherwise were inaccurate.

On where the received hard currency will be spent, too, Noubakht said that this money is a part of the countyˈs public funds and can be spent in the process of the countryˈs development plans.

Earlier this month on April 10 another member of the Iranian nuclear negotiation team Hamid Baˈidinezhad had told the IRNA Political Desk that the fifth installment of Iranˈs freed monetary assets will be released ˈthis weekˈ and its amount will be US 450 million.

He had also said that in accordance with another part of the reached agreements the engines of some Iranian airplanes will be forwarded to their genuine and authentic service centers in Europe for repairs.

Baˈeidinezhad who is the head of the Secretariat Office of the Geneva Deal and was speaking with IRNA after a two-day round of talks with the six world powers aimed at supervision over lifting the obstacles in the way of implementing the Geneva deal said that four out of the eight installments of the Iranian frozen assets have been received and after getting the 5th installment their summed up amount will be 2.65 billion dollars.

The managing director of the Foreign Ministryˈs Political and International Affairs Office said that in accordance with the Iranian Central Bank policies, those resources can be spent to purchase foreign currencies, gold, or any type of needed goods which are not sanctioned, and moves of that nature are in process now.

Baˈidinezhad said that the non-sanctioned Iranian banksˈ accounts in Japan and Switzerland are now fully activated and registering orders for buying major goods, such as medicines and agricultural products without paying any cash and using the released monetary assets.

The foreign ministry official said that there is no ceiling for such purchases, reiterating that arrangements have also been made to pay the tuitions of the Iranian students abroad, which will be finalized after further negotiations, as well as paying the cost for medical services to the Iranians patients abroad.

That is while the Obama administration, in the wake of a promising first round of nuclear diplomacy with Iran, said it was weighing a proposal to ease the pain of sanctions on Tehran by offering it access to billions of dollars in frozen funds if the Iranian government takes specific steps to curb its nuclear program, a senior administration official said last Thursday.

Such a plan, under which the United States could free up Iran’s frozen overseas assets in installments, would avoid the political and diplomatic risks of repealing the sanctions, which had been agreed to by a diverse coalition of countries, the official said.

It would also give President Obama the flexibility to respond to Iranian offers that emerge from the negotiations without unraveling the global sanctions regime the administration has spent years cobbling together, he said.

The official likened the plan, which is still being debated inside the White House and the State Department, to opening and closing a financial spigot, the New York Times reported.