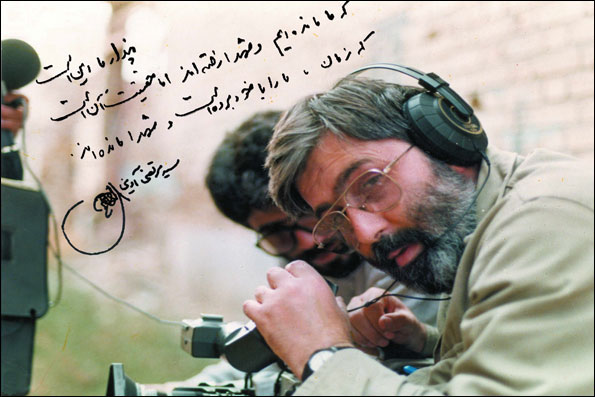 Moviemakers portray Aviny’s life in “Image of the Pen”

The crew of 143 Furrow and Merajiha (Persian for ‘ascendants’) will attend the conference.

Martyr Aviny (Sayyed Morteza Aviny) was a skillful author, the narrator of Ravayat-e Fath (Narration of the Conquest) – a TV program serialized in Iran’s state TV’s channel 1 – the chief editor of Sureh Magazine – an artistic and literary magazine – and the head of TV department of the artistic center. When working in the war front in southwestern Iran for a new series of Ravayat-e Fath, with a group of cameramen, he was killed by a landmine explosion, mined during Iran-Iraq eight-year war. He was not alone; his colleague Mohammed Sa’eed Yazdanparast was another martyr.

After his martyrdom the Leader Ayatollah Khamenei commemorated him as “the lord of martyr authors”.

The martyrdom anniversary of an Islamic revolution’s artist who spent his life in the battlefields and who was the epic narrator of the Islamic combatants’ efforts was called “The Day of the Islamic Revolutionary Art”. This was following the Leader’s directive and suggested by the poets and poetesses, authors and the artists of the Artistic Center of the Organization of the Islamic Propagation.

The Persian sentence on the photo is an oft-quoted line by Martyr Aviny saying that: “We think that we remain and martyrs have gone but the reality is that Time has brought us away and the martyrs remain.”