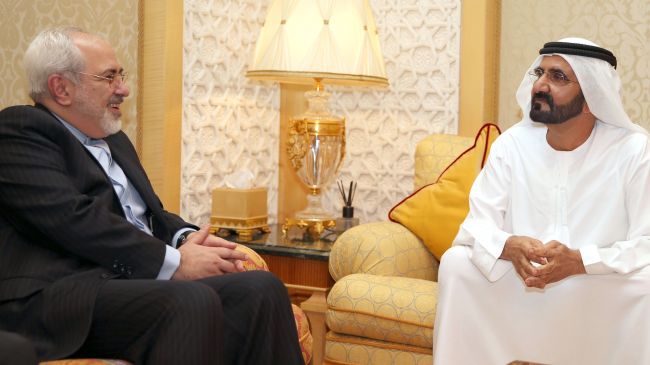 “Iran’s nuclear negotiations are not against any party and the results of any accord will benefit the entire region,” Zarif said in a meeting with United Arab Emirates (UAE) Prime Minister Sheikh Mohammed Bin Rashid al-Maktoum in Dubai on Tuesday.

He also said the ongoing developments in the region necessitate further cooperation between Iran and the UAE.

“We believe that more high-level cooperation must take place between us and the UAE in the Persian Gulf …our region is suffering from extremism, sectarianism and terrorism today and it would be in the interest of everyone to stop this trend,” said Zarif.

For his part, Sheikh al-Maktoum reaffirmed Zarif’s remarks that a final nuclear accord on Iran will benefit the whole of the region.

The latest round of high-level nuclear negotiations between Iran and the six powers – the United States, France, Britain, Russia, China and Germany – ended on Wednesday in Vienna.

The two sides have agreed to resume their negotiations on May 13.

Negotiators from both sides say a final nuclear agreement can be reached within three months.

Iran and the six world powers sealed an interim deal in Geneva on November 24, 2013, to pave the way for the full resolution of the decade-old dispute with Iran over the country’s nuclear energy program. The deal came into force on January 20.