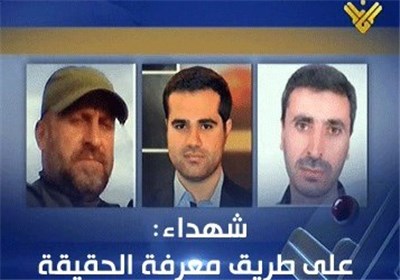 TEHRAN (Tasnim) – Three of Al-Manar crew members, working in Syria, were martyred after militant groups opened fire on the TV network’s crew in the town of Maaloula in Syria’s Qalamoun region.

The three martyrs, include the reporter Hamza Hajj Hasan, the technician Halim Allaw and the photographer Mohammad Mantash.

The crew was broadcasting the Syria army’s operations in Maaloula when the terrorists targeted their Press vehicles.

Al-Manar TV Channel announced the martyrdom of its members and offered condolences to their parents, asking Holy God to bless them with His mercy.